Designed after Tony was detected approaching a Roxxon space station using the Space Armor, the Stealth Armor was created to focus on stealth over offensive weaponry. It was used by Stark to infiltrate the Heaven's Hand fortress in the area formerly known as East Germany.

The Stealth Armor was later used by Stark to infiltrate Soviet airspace during the first Armor Wars.[3]

Ah, the stealth armor. Remember when I spilled coffee on it a few years back? It was never the same. 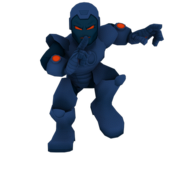 This special sneaky armor may let Iron Man scout behind enemy lines without being seen, but it still packs quite a punch!

The Stealth Armor maximizes concealment over everything else. As a result, it is more fragile and cannot fit into a briefcase.

Radar-absorbing coating, ECM jamming, and a wave-modifying plasma layer held by a forcefield distort incoming radar and sonar signals. Emissions from the jets are washed by supercooled air as the boots themselves have liquid oxygen rings. If discovered, it could launch chaff.

Subterranean equipment was added for reaching underground areas. The sensory systems were upgraded for stealth missions, including an "auto-camera" with microfilm.

The original model had no weapons systems. A later version had limited weaponry: repulsors have enough charge for three shots. Its unibeam is usable but similarly low-powered. [4] The later upgrades included the ability for the armor to change colour for stealth purposes, although this camouflage ability was limited to working only in environments that were of one colour, such as snow.

Retrieved from "https://marvel.fandom.com/wiki/Iron_Man_Armor_Model_7?oldid=5889194"
Community content is available under CC-BY-SA unless otherwise noted.