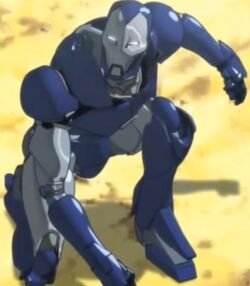 The Iron Man Dio Armor is an Iron Man Armor variant built by Tony Stark. The armor was specially designed by Tony Stark when he wanted to retire as Iron Man. He built it to be used by others so they could fight crime in his place.[1]

Tony brought the armor to Japan for testing, but it was stolen by the Zodiac. They were used by Ho Yinsen against Tony. Tony fought Yinsen in their respective armor, but Yinsen dies in a battle with the Iron Man Sigma (robots created by Yinsen and controled by Zodiac). Afterwards, he took the armor back to the United States of America for safekeeping.[1]

Like this? Let us know!
Retrieved from "https://marvel.fandom.com/wiki/Iron_Man_Dio_Armor?oldid=6464513"
Community content is available under CC-BY-SA unless otherwise noted.