It's easy at first. A man builds a suit. A man decides to help people. Then a man has a company. A mission. A vision. A brand. And soon a man has a reputation. Those things begin to crowd the picture and soon it's hard for the man to see the man.

Appearing in "Rest Your Brains"

Synopsis for "Rest Your Brains"

While fighting Terrax the Tamer, Tony Stark remotely divests himself of Stark Unlimited. After expressing in an interview that he wishes to return to his roots, he auctions off his Malibu mansion, buying a brownstone in the Lower East Side of New York City. Tony also purchases a 1978 Dodge Aspen, and takes it to a drive on a street race that he loses against a racer named Halcyon. While Tony is settling in at his new apartment, the Wasp flies by to formally break up with him, and they both agree it's for the best.

While hosting a party for his acquaintances who insist on reeling Tony back into business, Stark reconnects with Patsy Walker, who questions Tony about his sudden change in lifestyle and offers Tony to confide in her. After briefly holding a conversation with invitee Fuller Tielhard, who talks to Tony about lightning energy harvesting, Tony invites Patsy to his workshop to show her off his new vintage-style Iron Man Armor. Tony suits up and Patsy changes into her Hellcat costume, and the duo ditches the party, leaving the attendees to be surprised by an electromagnetic pulse to fry off their electronics. Tony's confiding of his identity crisis is interrupted when a helicopter sitting on top of the New York Public Library prompts him and Patsy to investigate and find Unicorn stealing a book. They confront the villain as he rambles about serving a god he calls "The Other." After defeating Unicorn and inspecting the book he had tried to steal, which turns out to be a Gutenberg Bible, Tony is hit by a bolt of pink lightning, which incinerates the tome. Back in Tony's apartment, Tielhard stares into the distance out of one of the windows.

Monday. A kid playing the violin outside an electronics store is chased off by a security guard. A voice-over talks about the Michelin Man, recalling that it's colored white because rubber used to be that color until carbon black started being added to the tires to make them last longer. The man expresses amusement at the kind of things humans can do, but how soon they forget they did it. Iron Man smashes a window of the store, crashing Terrax the Tamer into the building. The voice-over continues, describing a 1971 Plymouth Duster. Another voice joins him, raising doubts about the car. Gripping Terrax by the neck, Iron Man flies the villain through another building and into the sky. Stark is mentally absent throughout the fight, much to Terrax's annoyance, talking to his new A.I. assistant named B.O.S.S. The A.I. informs Tony the process to withdraw from the board of Stark Unlimited is complete, and Tony orders him to distribute 25 out of the 65 billion dollars of the divestiture into the market when it opens in the morning. Iron Man and Terrax reach orbit, and Tony blasts the villain into a satellite. Afterward, Tony checks his social media account on his phone and is dumbfounded by the backlash he received from destroying the satellite on his post announcing Terrax's defeat.

Tuesday. Tony Stark is sitting down for an interview, and explains that he is stepping away from technology altogether to get back to his roots and remember what is it like to be a human. The interviewer brings up Tony's billionaire divestiture, his millionaire Malibu mansion, and the dangerously-armed Iron Man Armor. Tony points out he reinvested a third of his exit package, but the interviewer interjects it caused an unbalance in the stock market. The interviewer wonders how many people have been killed because of Stark's inventions and if that has anything to do with him stepping away, leaving Tony reflecting on that. On social media, a post of Tony quoting John Muir is also met with criticism.

Wednesday. Tony is auctioning off his Malibu mansion. Inside the house, he is standing with Jim Rhodes in the Hall of Armor, and tells him to pack all of it up. The voice-over car listing continues. On the road, Stark is riding a Shelby Cobra with Glory Grant for a cross-country road trip for an article. While speeding on the car, Tony throws away his phone off a cliff. Glory clarifies she has decided to instead write a book about Tony. A tire of the car bursts, forcing Tony to drift. The voice-over man suggest the other person a Shelby Cobra. On the car, Tony crashes into a post, leaving the car dangling at the edge of the cliff. He suggests Glory to instead drop her off at the airport. The other person in the voice-over tells the man he had a Shelby Cobra, but didn't love it.

Thursday. Tony is at a car shop, having shot down the vendor's numerous offers. Stark explains the man he wants something simple since he is in the middle of recalibrating. After the vendor expresses he has an idea, Tony leaves on a 1978 Dodge Aspen. As Tony joins the transit in the street looking dejected, the vendor, in a voice-over, points out the car's customizability, and also gives Tony the advice that he isn't going to fix his life with a car. In the online forum Readit, a post announces that Stark has bought a historic brownstone on the Lower East Side. The comments section shows criticism. Tony stands in an empty loft. In a voice-over, he asks the vendor where to take out the car for a test, and he suggests Amsterdam Avenue. As Tony stands in front of the window, he is approached by the Wasp. She expresses that she wanted to tell Tony face-to-face that she has moved on, and he agrees it's the best. Tony and Janet say their goodbyes, and she flies away.

At night in Amsterdam Avenue, Tony approaches a car meet, and bets a roll of five thousand dollars. The organizer calls for another racer called Halcyon. When he comes face to face with Tony, he turns out to be deaf, but uses sign language to taunt Stark. The two competitors then race, and Halcyon surpasses Tony after bumping his car following a narrow turn. He looks breezy while Tony is agitated. The race ends with Halcyon on the lead, leaving Tony dejected and breaking a sweat. As Halcyon is counting the money, one of the attendants offers Tony to have him back for a race.

On social media, Tony announces he is hosting a party for old friends of his, also attracting criticism from the replies. At the party, Tony is approached by several people who want to make business with him. Tony is approached by Patsy Walker, whose presence relieves him. Patsy asks Tony to confide on her what he is going through, since she feels he is confused about his new approach to life. They are interrupted by a man who introduces himself as Fuller Tielhard, who insists Tony pays attention to him, and his uneasiness catches Tony and Patsy's attention. Tielhard ensures Tony that he can harvest lightning energy to ensure a new waste-free energy source. After expressing interest to Tielhard's comment, Tony leaves with Patsy to show her something at his workshop downstairs. After passing by Tony's car, which Patsy jokingly points out as a sign of a midlife crisis, Tony opens a briefcase on a desk, revealing his new Iron Man Armor. Tony suits up, unveiling the armor's vintage style, which Patsy commends. Iron Man offers Patsy to ditch the party and go on patrol. When Patsy asks Tony about his guests, Tony reveals he has an electromagnetic pulse set to go off in the building to fry off their digital devices in twenty-four minutes, prompting Patsy to express she now understands the invite list. Tony asks her if she has her suit, and Patsy assures him she never leaves home without it. With Patsy suited up as Hellcat, Iron Man jumps into action with her.

Meanwhile at the party, one of the invitees wonders where is Tony Stark. A burst of energy suddenly goes off the entire building, leaving everyone in the dark. Tony and Patsy reach the top of the Empire State Building and rest. Tony takes off his helmet, while explaining Patsy his current crisis, which is that he has lost himself and doesn't know who he is. Patsy interjects with sardonic remarks, and tells Tony that his new humility is just a manifestation of his ego. Tony suddenly spots a helicopter on top of the New York Public Library, and he and Patsy go to investigate. From a window they see Unicorn heading upstairs with a book. They intercept him at the rooftop when he is heading to the helicopter. He rambles about serving "The Other," and Iron Man fires his repulsor blasts at him. Unicorn blocks them with his arm, further babbling about "The Other" calling him back from the sea, also claiming that "The Other" is his monotheistic god and that he is talking to him at all times. Hellcat sneaks behind Unicorn and punches him, but he retaliates with a blast from his forehead, calling her a heretic. Iron Man grabs Unicorn from behind, and asks B.O.S.S. to better defend against the villain's blasts, but the A.I. doesn't manage to reply. Unicorn releases a pulse of energy from his forehead, sending Iron Man flying away. He reaches the helicopter and flies away, but Iron Man takes off and flies into the vehicle's blades, causing it to crash into the street. Unicorn crawls out of the crashed helicopter, and Iron Man takes the book off his hands, discovering that it's a Gutenberg Bible. Unicorn warns Stark about "The Other" seeking vengeance upon him, but Hellcat knocking him out with a kick to the face. As Iron Man is checking out the book, a pink lightning strikes him, destroying the book in the process. Tony recoils from the attack, wondering where did it come from.

Later, Tony announces on social media about the destruction of the Gutenberg Bible. He is met with further harassment from the replies, and his account next appears to have been deleted. Back at Tony's apartment, Tielhard looks from outside the window with dead eyes, and the shadowed half of his face becomes speckled with pink stars.

Tony Stark is looking to restart his engine. He decides he’s going back to basics, putting away his high-tech toys and high-profile image so he can get his hands dirty again. It’s time to dig into the guts of real machines, put on some old-fashioned metal and fly.

But can he really lay that Stark-sized ego down? Life isn’t that simple, something that old friends and frustrating foes are quick to point out. If you strip down a billionaire to his bolts, does he run solid or just overheat?

Tony’s going to find out once a threat to the entire universe rears its head from the past. As he suits up again, Tony remains sure of one thing: he’s still IRON MAN down to his flesh and blood core. 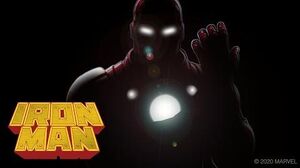