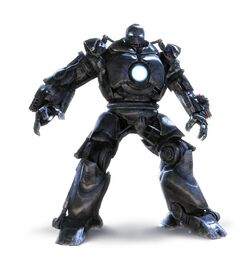 After Tony Stark's escape from captivity using the Iron Man Armor MK I, the Ten Rings (led by Raza) found the armor in pieces in the desert, and collected them. Raza contacted Obadiah Stane and offered him a deal. Raza would give Stane the armor so that Stane could manufacture more to give back to Raza. Stane then incapacitated Raza and took the armor, then Stane's men killed all of Raza's men. Stane then hired scientists at Sector 16 to create a new, bigger and more advanced suit of armor.

The scientists were able to create a new suit, but they could not create a miniature arc reactor to power it. Stane had to resort to incapacitating Tony to steal the arc reactor from his chest. Pepper Potts, Tony's assistant, found out about Sector 16, so she, along with Agent Phil Coulson and other S.H.I.E.L.D. agents, went to arrest Stane.

Stane, back at Sector 16, heard them break in, so he rushed into his new armor. After taking down a pair of S.H.I.E.L.D. agents, Iron Monger went after Pepper, at which point Iron Man intervened. They fought on the highway, before Iron Man took to the skies in the hope that Stane couldn't follow. However, the Iron Monger suit had been equipped with a rocket thrust capability, and gave immediate chase, although didn't get far before icing up at high altitude. The fight quickly returned to the ground and both combatants ended up on a roof, by which point both suits had sustained heavy damage. Tony managed to outsmart Stane by using the giant arc reactor in the building as an advantage, Stane and the armor were electrocuted, and they fell into the giant arc reactor causing it to explode, presumably along with the Iron Monger armor.[1]

According to Obadiah Stane this armor, when adequately powered, is "superior in every way" to Iron Man; however it has a least two key weaknesses: it cannot function at the freezing temperatures of the upper atmosphere and has partially exposed wiring in the neck area, something Tony Stark exploited to disable its targeting system. The armor's weaponry is exposed (except for the missile launcher in his shoulder).

The Iron Monger armor gave Stane superhuman strength enabling him to easily lift a car, and appeared to be slightly stronger than Stark in the Iron Man Mark III (although Stark was wearing the Mark I Arc Reactor when he fought Stane). The armor is also equipped with a 23mm six-barreled Gatling gun, Stark S-category missiles, a laser-guided warhead, omnium exterior, a stun device, a rotary grenade launcher, and flight equipment.

The Iron Monger's onboard computer had little navigational focus, as the suit was based on Stark's Mark I armor acquired from the Ten Rings. Obadiah Stane made smart targeting the HUD's primary component. Omnium, a steel alloy of invincible strength, was developed in Stark Industries' Sector 16, specifically for use in the Iron Monger suit.

Retrieved from "https://marvel.fandom.com/wiki/Iron_Monger_Armor_(Earth-199999)?oldid=6083319"
Community content is available under CC-BY-SA unless otherwise noted.