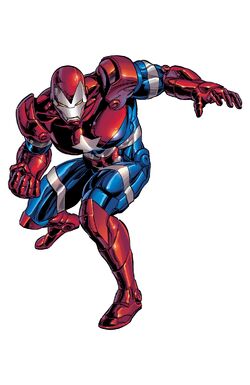 The symbolism. Captain America. Iron Man. The soldier and the knight. These are more than men. They are symbols that people gather behind...

After the Invasion of Skrulls, Norman Osborn became the new world hero and replaced Tony Stark as the director of S.H.I.E.L.D., or rather its successor H.A.M.M.E.R..

However, Osborn lacked the technical expertise on how to operate the armor's repulsor generators efficiently (replacing it with the not as powerful Uni-Beam projector star-shaped output), making it less powerful than Stark's Iron Man Armor.

It was hacked into and shut down by Iron Man at the end of the Siege of Asgard due to the armor based off an older design.

It was later revealed that Norman was recreating the armor in a workshop under Oscorp Tower. The armor, along with the workshop, was destroyed by Max Modell after Peter Parker distracted both Hobgoblins Roderick Kingsley and Phil Urich by "pretending" to be Spider-Man.[1]

After the Siege of Asgard, the United States Departament of Defense acquisitioned propietary H.A.M.M.E.R. hardware, including the Iron Patriot Armor. Some modifications were made in order to turn in into a drone, including the addition of a base-level A.I. which piloted itself.

At a weapons expo, A.I.M. incited a conflict against Daisy Johnson and Nick Fury, Jr., and used the confusion created to steal the Iron Patriot Drone in exposition.[2] The terrorist organization managed grow the armor's low-level A.I. considerably and free the entire in-development fleet from a factory assembly in China, using the army of sentient drones to incriminate the United States in numerous international attacks. S.H.I.E.L.D. sent the Hulk to destroy an army of droids that were going to attack Iran, and they were successufully disabled by Banner.[3]

Meanwhile, S.H.I.E.L.D. intel came to the conclusion the Iron Patriot androids could be reasoned with, and agent Phil Coulson asked Colonel James Rhodes to talk to them, as he had experience and military training. Using holographic communication, S.H.I.E.L.D. hacked into A.I.M.'s network and allowed Rhodes to talk to the suits, who recognized him as "the Pilot," along Tony Stark being "the Maker." Rhodey managed to make the Iron Patriot army understand their actions of abruplty attacking tactical points of enemies of the US was unacceptable. After he stated he could teach them better by example, the androids sent Rhodes a different version of the Iron Patriot armor for him to pilot.[4] With the army of droids at his command, Iron Patriot helped the Secret Avengers in their assault on A.I.M. Island.[5]

Retrieved from "https://marvel.fandom.com/wiki/Iron_Patriot_Armor_Model_1?oldid=5213379"
Community content is available under CC-BY-SA unless otherwise noted.