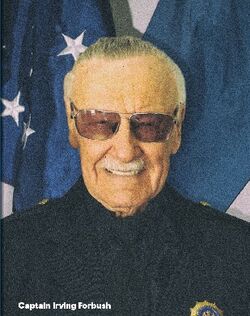 Captain Irving Forbush climbed the ranks of the New York City Police Department and gained the rank of Captain. As such, he was honoured by displaying his portrait inside the 15th Precinct Police Station.[1][2][3]

Forbush then became a partner of a company called Forbush and Associates, that advertised in in long-distance autobuses. Per its publicity, a person can obtain great amounts of money by doing little more than getting in contact with Forbush.[6]

Like this? Let us know!
Retrieved from "https://marvel.fandom.com/wiki/Irving_Forbush_(Earth-199999)?oldid=6074301"
Community content is available under CC-BY-SA unless otherwise noted.