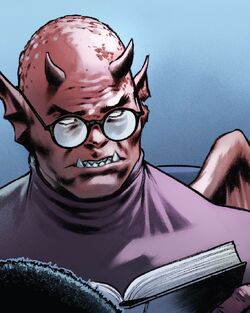 Isaac Christians, a veteran from World War I, eventually became Mayor of Christiansboro, Virginia, a town principally built up by his father. In recent years, though, Christianboro was tottering on the brink of economic ruin. Christians had studied the occult and decided to use it to save the town. He contacted the demon Avarrish, a member of the Six-Fingered Hand.[1]

Christians agreed to allow his spirit to inhabit the body of a gargoyle temporarily and to do the bidding of the Six-Fingered Hand for that time in exchange for the solution to Christianboro's ills. Christians' spirit was placed in the body of the Gargoyle himself, and Christian was assigned to aid in capturing Patsy Walker, who as Hellcat was a member of the Defenders. However, Isaac could not bring himself to fulfill the Hand's wishes, and turned against them to aid the Defenders.[1]

As the Gargoyle, Isaac became a regular member of the Defenders for months. He remained with the team when Beast reorganized them into a more official roster.[2]

In her final clash with the Defenders, using power granted her by the Beyonder, Moondragon withdrew Christians' spirit from the Gargoyle's body and transformed it into a gigantic, even more grotesque from that was filled with the power of the malevolent being called the Dragon of the Moon. When four of the Defenders defeated Moondragon and the Dragon of the Moon, the Gargoyle's body was apparently carbonized, becoming a statue of dust and also ashes.[3]

Christians found refuge for his spirit in a crystal and through it exerted a mental influence over a man in order to find Pamela Douglas, the cousin of Moondragon whom Moondragon was using as a vessel for her own spirit. The man wearing the crystal plagued Moondragon's life until Moondragon repentantly persuaded Pamela to have her carry the crystal back to the moon colony of Titan, where Moondragon was preparing to have a new body grown from cloned samples of her tissue.[4]

During the course of their journey to Titan, Pamela was revealed to have immense psychic powers of her own. After Moondragon received her new body, the three journeyed back to Earth along with the Titan Demeityr, who was growing fond of Pamela.[5]

After a fight with Moondragon, the full extent of Pamela's powers was revealed by the sentient galaxy and former Defender Cloud. Cloud also created a new body for Christians out of some of her matter, giving him the ability to change forms from his human to his Gargoyle one. Gargoyle, Pamela (now Sundragon), and Demeityr continued to travel through space. Eventually, Christians returned home and parted ways with Sundragon amicably.[6]

The Gargoyle somehow ended up imprisoned on the laboratory world of the alien known as the Stranger but was released when Quasar visited the Stranger's World.[7] Returning to Earth as part of a 'caravan' of refugees, the Gargoyle apparently went to look up his former friend Dolly Donahue only to learn that she had died. With nowhere else to go, he entered the service of former Defender Daimon Hellstrom, acting as his butler for a time.[8]

More recently, he was a member of the Initiative, training young superhumans at Camp Hammond. Since then he opened a restaurant called Issac's Oysters, hiring Frog-Man as a busboy,[9] and keeping in touch with fellow former Defenders Hellcat and Nighthawk.[10][11] He also briefly spent time as a prisoner of Alexei Kravinoff, the son of Kraven the Hunter, who had taken his father's legacy and formed a zoo of captured animal-themed people.[12]

The Gargoyle has a number of superhuman powers derived from the demonic body he possesses. His leathery skin is more durable than human flesh and is able to withstand ballistic impact up to and including .30 caliber armor-piercing shells. His body is impervious to disease and aging. His speed and reaction time are equivalent to those of an average human male in his twenties, as is the acuity of his senses.[13]

The Gargoyle's original spirit had considerable knowledge of magic. Christians himself was a student of the occult. But apart from being able to summon minor demons he has little magical ability.[13]

The Gargoyle's rudimentary, featherless, scalloped wings, which span 5.8 feet from tip to tip at full extension, are insufficient in and of themselves to bear him aloft. The real mechanism of flight was a mystical power of levitation. His wings simply help him maneuver. The Gargoyle is able to support his own weight plus 100 pounds of cargo; he can fly at speeds up to 25 miles per hour. He is able to fly for about 3 hours before he tires appreciably and has to alight.[13]

The Gargoyle also possesses the ability to manipulate bio-mystical energy, the inherent power of the life-force itself. This ability was created when Christians' human spirit first entered the Gargoyle's demonic body; the Gargoyle did not possess it previously. The Gargoyle can siphon life-force from other people, causing varying degrees of shock and physical weakness depending upon the amount he siphons. Although an organism's life-force is self-renewing, if he were to take too much of it from someone, the victim would die. (Christians is extremely careful to prevent this from happening.) Christians does not absorb this life-force for personal use when he siphons it; instead, he lets it dissipate into the biosphere as if he were letting air escape from a balloon.[13]

The Gargoyle can also project his own rapidly regenerating life-force for a number of effects. By projecting his bio-mystical energy rapidly at an object or person, he can create a concussive force of varying impact depending upon the amount he projects. The maximum amount he can expend without endangering himself has sufficient concussive force to demolish a small house or displace an average-sized person about 100 feet. By projecting his bio-mystical energy field around himself (or others) he can protect himself from certain elementary magical spells and powers bolts. This field has a maximum range of about 5 feet from the center of his body, and he can sustain it for about 3 minutes before jeopardizing his own store of life-force. The Gargoyle can also project fear into other people through his bio-mystical energy.[13]

Each of the Gargoyle's expenditures of bio-mystical energy utilizes his own life-force to varying degrees. The Gargoyle has to use his power wisely, for too great or too rapid a depletion of his energies could endanger his own life even to the point of killing him. He is capable of using his bio-mystical powers at a moderate rate of expenditure for up to a half hour before he begins to impair his own life functions.[13]

The Gargoyle generally uses his hands to help him direct his bio-mystical energies. Frequently this energy manipulated is accompanied by a visible "black light," which is not, however, ultraviolet light.[13]

The Gargoyle can regenerate at least some sections of his body if they are damaged or severed. He once grew his right hand back after it was severed. The regenerated hand looked distinctly different from his former right hand until it reverted to the same appearance as the previous hand due to a psionic attack by Moondragon.[13]

The Gargoyle can be commanded by wizards who speak a certain obscure spell. An Afghan Gnostic once took control of the Gargoyle, imprisoning him by means of mystical pentagrams. The wizard could somehow give himself various mystical powers by drawing upon the Gargoyle's power, and enable the Gargoyle to exhibit powers (such as growing to gigantic size) that he either possibly could not or did not know how to use himself.[13]

The Gargoyle possesses superhuman strength, and can lift (press) approximately 2 tons. In his human form, Isaac Christians possesses the normal human strength of a man of his age, height, and build who engages in little regular exercise.[13]

In several of his appearances in the Hellstorm: Prince of Lies series, the Gargoyle was mistakenly depicted as having cloven hooves. No explanation was given for this anomaly.

Although he has a Jewish name, Isaac Christians is not Jewish.[14]

Like this? Let us know!
Retrieved from "https://marvel.fandom.com/wiki/Isaac_Christians_(Earth-616)?oldid=6455296"
Community content is available under CC-BY-SA unless otherwise noted.