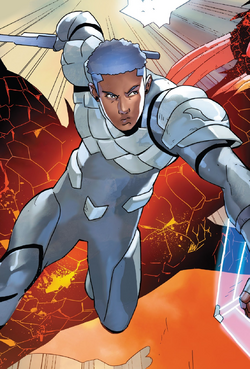 The Protector showed up during a confrontation between an Asgardian Dragon and the Agents of Atlas. As the team was only trying to contain the beast in order to send it back to Muspelheim, the Protector fought it thinking that it was a threat to the people of Madripoor. He subdued and knocked the dragon unconscious with his sword and then decided to introduce himself to the Agents right before he teleported away.

After their introduction to the metropolis of Pan by its creator Mike Nguyen, the Agents watched as Ikeda was thrown to the ground after he mumbled about multiple dragons invading the city.[1]

Like this? Let us know!
Retrieved from "https://marvel.fandom.com/wiki/Isaac_Ikeda_(Earth-616)?oldid=5828923"
Community content is available under CC-BY-SA unless otherwise noted.