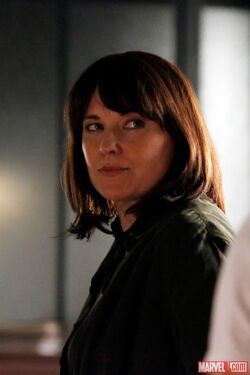 Izzy Hartley was a S.H.I.E.L.D. agent until the organization fell apart when Hydra revealed themselves. At that point she found herself among a small group of loyal agents on the Iliad fighting for survival against Hydra forces aboard the ship. Together they rescued their commander Robert Gonzales and took back the ship.[1]

Hartley subsequently became part of a Gonzales faction mission to infiltrate the newly reformed S.H.I.E.L.D. faction led by Phil Coulson. She managed to gain entry to the group by leading a team of mercenaries that included Lance Hunter and Idaho, capable soldiers in need of work, while Coulson's S.H.I.E.L.D. rebuild needed reliable personnel.

One of the (presumably many) missions Hartley's team of mercenaries worked on for Coulson included buying intelligence on a Level 10 asset from a former S.H.I.E.L.D. agent, Roger Browning. As Browning and Hartley worked out the details of their deal, the Hydra assassin Carl Creel took them by surprise, and killed Browning. Hartley and her mercenaries tried to stop him from getting away, but their bullets seemed to bounce off him.

After regrouping with Coulson's agents, they reported back to Coulson at the Playground. The 0-8-4 Browning was selling information on was the Obelisk, an item the SSR recovered from Hydra in 1945. To prevent the Obelisk from falling into Hydra's hands, Coulson had Hartley and her mercenaries accompany a team of his agents to the army base where the device was currently being held to retrieve it. Although they were briefly held up at the gate, Coulson's team made their way into the base.

Hartley found the Obelisk, but was attacked by Creel soon after. She tried to use the Obelisk to stop him, but the moment she grabbed it the item painfully paralyzed her hand to prevent her from letting go of it. The rest of the team were able to scare off Creel, but by then the army was closing in on them. Under fire, Coulson ordered his team to continue with the mission as planned; however, Hunter realized his boss was no longer able to fight. Hartley's team left Coulson's agents at the base, and drove off with the Obelisk still gripped in Hartley's petrified hand. They were left with no other option to amputate Hartley's hand to save her. Soon afterwards, Creel appeared in the middle of the street and caused their car to crash and flip over. Hartley and Idaho were killed instantly, and Creel made off with the Obelisk.[2]

Like this? Let us know!
Retrieved from "https://marvel.fandom.com/wiki/Isabelle_Hartley_(Earth-199999)?oldid=6283158"
Community content is available under CC-BY-SA unless otherwise noted.