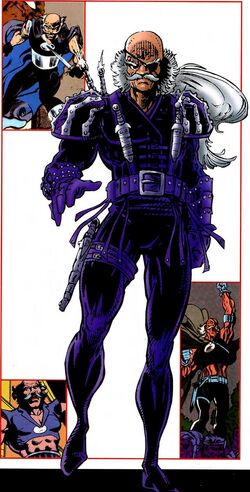 Isaiah Curwen was a Cardinal at Vatican City and a contender for the Papacy. Despite The Pope's endorsement, the College of Cardinals did not elect him due to his youth and fanaticism. Curwen later developed a fascination over the black arts. He came to believe that this was part of a divine plan. His mission was now to learn the secrets of magik, in order to become God's personal weapon against Satan as The Silver Dagger.

Curwen quit the cardinalate to travel the world and study "the dark religions." He proved to be a student with considerable aptitude. Once a master in magiks had taught him everything he could teach, Silver Dagger would execute "The Lord's vengeance."

Finally, the time came for Silver Dagger to seek out the Sorcerer Supreme. Isaiah Curwen proved clever enough to enter the Sanctum Sanctorum despite its many spells of protection. In an altercation with Dr. Strange and Clea, Curwen was drawn into Agamotto's "realm of unreality."[1]

Eventually, Curwen learned to affect events outside of Agamotto's realm and on the corporal plane. This led to Curwen mystically enslaving Marie Laveau to stage a trap for Doctor Strange and allow him to return to Earth. In the end, Marie Laveau became free of Curwen's spell and stabbed him in the back with his own silver dagger. Doctor Strange, then, returned the mortally wounded Curwen to Agamotto's pocket dimension to recover.[2]

During his second tenure in Agamotto's realm, Isaiah Curwen felt the need for penance. At one point, Curwen surrendered his left eye to Agamotto to replace the eye Dr. Strange lost to Ghaszaszah Nyirh.[3]

Curwen's "holy war" took him west, were he found Jack Russell (aka Werewolf). In zealous fashion, Isaiah Curwen chased Werewolf into a forest, alone, at night, armed only with his silver daggers. The two, quite literally, fought tooth and nail until Werewolf fled the scene. The next night, Curwen lead his Sword of the Lord, a team of like-minded fanatics, armed with machine guns and silver bullets against a gang of werewolf bikers called the BrainEaters. At the end of the conflict, Russell, as Werewolf, bit deep into Curwen before he left him. Curwen and his followers believed that he had now become "tainted," "unclean." His Sword of the Lord then seemed to turn on their leader, but details are not known. It should be noted that Isaiah Curwen has been known for his personal charisma.[4]

Like this? Let us know!
Retrieved from "https://marvel.fandom.com/wiki/Isaiah_Curwen_(Earth-616)?oldid=5478931"
Community content is available under CC-BY-SA unless otherwise noted.