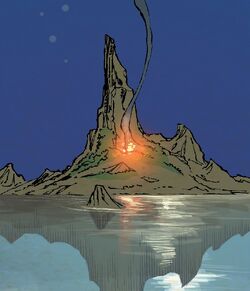 A tropical island in the Caribbean Sea, the Isla de Huesos was the site of a military base that was abandoned after a raid.[1] Following this, a mining operation was established in the 1940s but was shut down and ultimately deemed disastrous. With the island rumored to be cursed, it was abandoned until Venom abducted Spider-Man and brought him there for what was meant to be their final battle. Spider-Man faked his death to escape,[2] and for several months Eddie Brock and the Venom symbiote lived on the island in relative peace, barring encounters with arms dealers,[3] and the vigilante Darkhawk.[4]

A few months later, Spider-Man returned to the island and revealed he was still alive, seeking Venom's help to defeat Carnage - a monster born from the nihilistic serial killer Cletus Kasady (Eddie Brock's one-time cell-mate) bonding to the spawn of the Venom symbiote.[5]

Years later, Eddie Brock returned to the Isla de Huesos - deeming it a fitting place to dispose of the reborn Carnage symbiote. However, the new and improved Carnage crashed Eddie's plane and stripped him of the Venom symbiote, assimilating it.[6] Retreating to an abandoned bunker, Eddie equipped himself with an old flamethrower while the Carnage symbiote proceeded to take over all the animals living on the island. Surrounded, Eddie offered to give the Carnage symbiote free rein over the island to do with as it pleased in exchange for returning the Venom symbiote and letting him leave, but it refused and tried to take over him as well.[1]

Like this? Let us know!
Retrieved from "https://marvel.fandom.com/wiki/Isla_de_Huesos?oldid=5715149"
Community content is available under CC-BY-SA unless otherwise noted.