This page possibly merges distinct locations, and could be split in the future (Discuss).
Island M 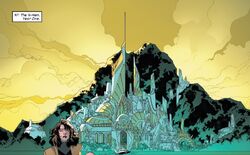 That uncharted island in the Atlantic, in the Bermuda Triangle, became the base of the mutant Magneto and his Brotherhood. In elder times, it was inhabited by the Ancients who commited atrocities there. Due to those, the island was described as being of "eldritch nature" and "evil". The Great Old One Shuma-Gorath also imprisoned his rebellious servant Quoggoth there hundreds of millions of years ago.

This island was older than human civilization, and perhaps even older than the human race itself. It was set in the area known in the modern age as the Bermuda Triangle

Horrible creatures, the Ancients, inhabited the citadel, and commited "unspeakeble atrocities" that causing and even the stones to radiate a primal malevolence that could never be purged, whether by time or effort. They apparently built statues made of crystalline circuity matrix, devices serving as guardian unites intended to protect the citadel.[4]
It is unclear whether the Ancients mentioned here are the group of beings known as the Ancients and possibly connected to the Old Ones, or if the term was used a generic name for the ancient creatures inhabiting the island.

Hundreds of millions of years ago, Shuma-Gorath imprisoned his rebellious servant Quoggoth on that sunken island.[5]

The island was ultimately raised from the bottom of the sea by Magneto to serve as his base of operations. After the X-Men defeated Magneto, who was able to escape from there through unknown means,[6] This uncharted island in the Atlantic Ocean was the base for the Brotherhood of Evil Mutants.[3]

While the Sub-Mariner came to the island to meet Magneto, Professor X detected its location, so the X-Men arrived and battled the Brotherhood. Namor eventually turned against Magneto and destroyed his giant magnet, withdrawing back to his kingdom, while the evil mutants retreated using the Magno-Ship.[7]

Quicksilver and the Scarlet Witch were taken by Magneto and Toad to a small, rockbound island in the turbulent Atlantic, which was magnetically raised from very ocean depths in order to serve as the future headquarters of the Brotherhood of Evil Mutants. There Magneto set up a gigantic synthetic conveyor belt to create a magnetically-induced perpetual motion, and agreed to declare before the United Nations that this island would become a refuge for peaceful mutants.[8] Later, as the X-Men were emprisoned here, Cyclops broke free and battled Quicksilver, until they were interrupted by the arrival of the Avengers, alerted by the Angel.[9] As both the Avengers and the X-Men eventually joined forces against Magneto, the island fortress was set to detonate by Toad, who then fled the base with Scarlet Witch and Quicksilver. When Magneto attempted to board their escape craft, Toad stepped on Magneto's hand causing him to fall back into the base as the ship flew off. The Avengers carried out the defeated X-Men a safe distance away and watched as the base exploded, seemingly killing Magneto in the process.[10]

Quoggoth attempted to use Kitty Pryde and Cyclops to free himself and his spawn from his prison, but failed.[5] Quoggoth would later escape, through unknown means.

Magneto and the New Mutants' base

The island was later used as a R&R location for Magneto and the X-Men/New Mutants due to its eldritch nature and eletronic systems, which masked it from the outside world. The X-Men were all uneasy in that place of evil. The statues of the island activated by the Chief Examiner, unleashing eldritch horrors upon the mutants, and turning them into statues.[4]

Flowers of Krakoa were later used to modify Island M into a Krakoan Habitat, a diplomatic biome interconnected with the island nation's collective consciousness,[14] so that it could secretly house Cradle Two.[15] During Knull's attack on the planet earth Kate Pryde's Marauders rescued a group of refuees from a ship of slave traders, who were brought to Island M as a temporary sanctuary.[16]

Like this? Let us know!
Retrieved from "https://marvel.fandom.com/wiki/Island_M?oldid=6038316"
Community content is available under CC-BY-SA unless otherwise noted.