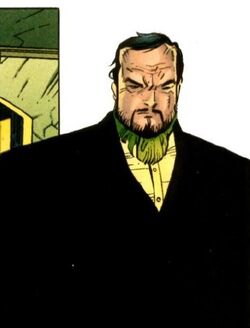 Ivan Pushkin was the boss of the Solntsevskaya Bratva, and the head of the Molina, otherwise known as the Russian Mafia. He used to be an operative of SMERSH (Death to Spies), a ruthless Soviet counter-intelligence agency. He had international goals, seeking to expand his operations into as many fields as possible. Upon the fall of the Soviet Union, he became a crimelord who established an expansive power base behind the Iron Curtain. He was a violent and sadistic man, who made the Kingpin look like a pussycat. Known as "Ivan the Terrible" he kept a dungeon with dead and dying victims, was brutally abusive to his mistresses who were kept submissive, and had no compunctions about personally killing a small child.

He was expanding his operations outside of the former Eastern Bloc. The Solntsevskaya Bratva had established operations in North America and had members throughout Canada. Major Arthur Barrington posed a threat to his plans. While Barrington was being held by Department H, Pushkin sent out the brainwashed Maverick to assassinate him. However, he had a second target, Pierre Cloche, Department H's Director of Foreign Affairs, who had been interfering with his plans, as well. While Maverick took out the security forces (including Alphans Vindicator and Puck) Pushkin's operative Sickle attacked Cloche.

However, Maverick overcame his brainwashing and, with the help of Vindicator, saved Cloche. However, Pushkin also sent his other operative Hammer who successfully killed Barrington. Pushkin later hired the Confessor to free Hammer and Sickle from the Ice Box. Afterwards he entered negotiations with A.I.M. which were a ruse, as he planned to steal their weaponry. He sent a force to A.I.M.'s hidden base, disguised as members of Hydra. They were partly successful, as they stole A.I.M. weaponry but Maverick and the Red Guardian prevented them from taking the biological warfare weapons.[1][2][3]

Like this? Let us know!
Retrieved from "https://marvel.fandom.com/wiki/Ivan_Pushkin_(Earth-616)?oldid=6161729"
Community content is available under CC-BY-SA unless otherwise noted.