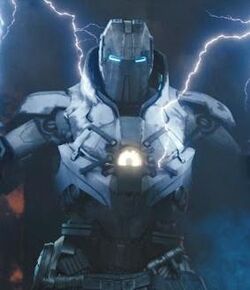 If you could make God bleed, people would cease to believe him. There will be blood in the water, and the sharks will come. All I have to do is sit here and watch as the world will consume you.

Ivan Antonovich Vanko (Russian: Иван Антонович Ванко) is the son of a Russian physicist who had helped Howard Stark design the Arc Reactor, but who had been subsequently deported from the United States when it became clear that he was working for the money rather than for the benefit of humanity. Ivan's father fell into alcoholism and proceeded to abuse the young boy for many years. At some point he was caught selling Soviet grade plutonium to Pakistan and served 15 years in prison. Over the years, Ivan became highly knowledgeable in the fields of physics and mechanical sciences, while adopting his father's hatred for the Stark family. After his father died in misery Vanko vowed to avenge him and constructed an exoskeleton, powered by a miniature arc reactor, to use against Tony Stark in an effort to discredit him and live out his father's revenge.

Vanko attacked Stark during the Monaco Grand Prix, using his Whiplash harness to destroy several cars in the race, but Stark ultimately defeated him using a portable Iron Man suit (MK V), and Vanko was sent to prison. While in custody, Vanko was asked by Tony why he didn't sell his technology to make money. Vanko replied that he wanted to remove Stark's awe from the people and demonstrate that Iron Man could be defeated. Ivan also deduced that Tony was being poisoned by the palladium in his arc reactor saying, "Palladium in the chest, painful way to die."

Later, Vanko escaped from prison with the help of Stark's rival Justin Hammer, who also orchestrated the faking of Vanko's death in the prison break. Hammer and Vanko then made a deal in which Vanko was to build armored suits like the Iron Man armor in exchange for Hammer Industries resources. Vanko changed the terms of the deal however, when he retrofitted Hammer's existing armor technology from wearable suits into unmanned drones.

Vanko was then locked up in the Hammer Industries New York factory, having enraged Hammer with the unexpected change. In the meantime, Hammer's plan to unveil the drones during the World Stark Expo went ahead, although Vanko again surprised his benefactor when the drones powered up and altered the simple unveiling to a full-blown demonstration. Vanko had killed his guards and remotely assumed control of the drones, as well as the War Machine armor worn by James Rhodes.

As a lengthy dogfight involving both suits of Stark armor and the Hammer drones progressed, Vanko abandoned the factory and got personally involved in an armored suit of his own. The superior bulk and capabilities of his suit initially outmatched the combined efforts of Stark and Rhodes, but Stark remembered that firing repulsors at each other would cause an explosion in the middle and he and Rhodes fired at each other with Vanko in the middle. The explosion defeated Vanko and destroyed his suit. As he lay wounded in the remains of his armor, Vanko revealed that he had concealed self-destruct devices in his suit as well as all of the Hammer drones. His last words were "You lose."[1]

While rarely utilized, Vanko is shown to be a capable hand-to-hand combatant, easily able to kill two presumably well trained guards of Hammer's with little damage to himself. He also is deceptively intelligent, his accent and thuggish appearance belaying a highly skilled mechanical and programming knowledge and cunning to outwit those around him, consciously manipulating Hammer and his men with their perception of him as weak or stupid. Vanko is bilingual, able to speak fluent Russian and intermediate English.

Ivan Vanko has the normal strength of a man his age, height and build who engages in regular intensive exercise. The Whiplash harness increased his strength up to three times.[2] When wearing the Whiplash armor his strength is considerably magnified to 200 tons degree. He has been shown simultaneously restraining both the Iron Man MK VI armor and the War Machine armor at once.

Vanko's hatred for Stark clearly dominates him, causing him to waste considerable talent on petty vengeance. He also has an overly sentimental attachment to a pet cockatoo which immediately soured his working relationship with Justin Hammer.

Like this? Let us know!
Retrieved from "https://marvel.fandom.com/wiki/Ivan_Vanko_(Whiplash)_(Earth-199999)?oldid=6444536"
Community content is available under CC-BY-SA unless otherwise noted.