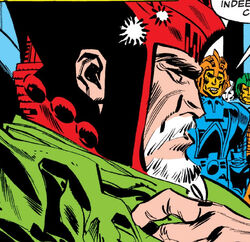 Ixar was a warlord from a war-torn world, that had lost all its population in a stellar war against a nearby star-system. He came to Earth with his army of Ultroids to capture the Avengers, because he can use captive super-powered beings to give his Ultroids the same powers.

He took the place of the mayor of Quicksilver's and the Scarlet Witch's home town to lure the super team into his space ship. When he was defeated, he left the Earth in search of other worlds where he could find new weapons.[1]

Like this? Let us know!
Retrieved from "https://marvel.fandom.com/wiki/Ixar_(Earth-616)?oldid=6020707"
Community content is available under CC-BY-SA unless otherwise noted.