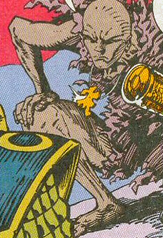 Ixastophanis was a lapsed priest of Mitra. As he arrived in Yezud with Shimata-Kawa, Ixastophanis helped Daedikaron and Tros freeing the captured Andamo, Welyn and Moru[1]. After killing a horde of Demons sent by Tolometh, Shimata-Kawa received a vision to search for the amulet in Vanaheim[2]. There he came across Conan[3].Ixastophanis quit Mitra's priesthood for the boundless treasure promised in the dream he visioned. He was attacked by a Sand Devil in the Desert of Yondo and entered the Citadel of Sin with the other seekers[4]. He was eventually killed by a Pool-Dweller[5].

Like this? Let us know!
Retrieved from "https://marvel.fandom.com/wiki/Ixastophanis_(Earth-616)?oldid=4880884"
Community content is available under CC-BY-SA unless otherwise noted.