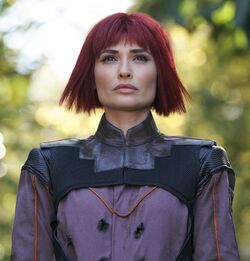 Izel was a non-corporeal entity who was the lover of Pachakutiq, the two of them coming from a world where local inhabitants had no bodies.[2]

Through space and time, the Di'Allas created on their world a duplicate of a Human who would not be born for another hundreds of years. Pachakutiq took over this body, but in the process his memories became entangled with that of his host, and formed a new personaility of "Sarge", who believed Izel to be the one who robbed him of his memories after killing his family. Izel was inspired to have a body for herself and the others of their kind and left her homeworld, taking the Di'Allas wih her.[2] She came to Terra, where a temple was build on the Yucatan from the same stone as Di'Allas. Izel planned to use the Di'Allas and the temple to open a portal to her world, allowing her kind to venture out and claim the bodies of others as their own.[3] However, the Di'Allas were stolen from her, and believing they left the planet, Izel ventured across the galaxy searching for them, a task which would take her centuries. Izel also gained the ability to create the Shrike, parasitic creatures that could enter a host's body and completely supress their will, making becoming a mindless slaves of Izel.[4]

After she visited Chronyca-2, Izel's ship was destroyed and her entire crew killed by Sarge, who subsequently destroyed the entire planet to try and prevent the Shrike from spreading.[4] Izel only escaped by salvaging a Jump Drive and teleporting away, after which she found herself stranded on Kitson. There she overheard that two criminal offenders who were about to be executed were Terrans and bought their freedom instead, offering them a passage to their planet in exchange for helping her find the Di'Allas. The Humans, Leo Fitz and Jemma Simmons advised Izel to commandeer the vessel Lazy Comet along with its crew,[5] whom Izel would later infect with the Shrike. By the time the ship made it into the Earth's orbit, "Sarge" was already on-world and allied himself with S.H.I.E.L.D. to stop Izel at any cost.[4] The ship was vaporized by an atomic bomb set off by Jaco,[1] but Izel survived the destruction of her spacecraft by hiding inside the body of S.H.I.E.L.D. agent Davis and made it to the S.H.I.E.L.D. base at the Lighthouse. There she body-surfed through seveal of S.H.I.E.L.D. personnel and eventually discovered the very thing she was looking for. The Di'Allas have been previously destroyed in an explosion, but their energies remained contained within a gravitonium device, which Izel obtained through a combination of threats and body-snatching. She then took Director Mackenzie and "Yo-Yo" Rodriguez hostage[2] and manipulated Doctor Marcus Benson into revealing the present-day coordinates of the Temple build for her ritual.[3]

Upon reaching her destination, Izel preyed upon the fears of Mackenzie and Rodriguez, causing the energy of the Di'Allas to create a copy of Flint, the only person they knew who had the power to re-assemble the Di'Allas.[3] Izel took over Flint's body and restored all three Di'Allas to their original form, and even though her captives had escaped, she sang her song which caused the portal to her world to open. Melinda May and Sarge arrived to stop her and May appealed to the part of Phil Coulson that continued to fight with Pachakutiq over the control of the body. Pachakutiq prevailed and after stabbing May with the special sword that he carried, pushed her through the portal,[6] into the world where life and death held no meaning. There May observed three other beings having each a smaller piece of one of the Di'Allas and attacked them with Pachakutiq's sword, causing their bodies to evaporate. May threw the stones out through the portal and Izel ventured on the other side to investigate, where she engaged May in a swordfight before leaving her. However May then went back on the other side and stabbed Izel with the sword, and Director Mackenzie used it to finish Pachakutiq as well.[7]

Like this? Let us know!
Retrieved from "https://marvel.fandom.com/wiki/Izel_(Earth-199999)?oldid=6074286"
Community content is available under CC-BY-SA unless otherwise noted.