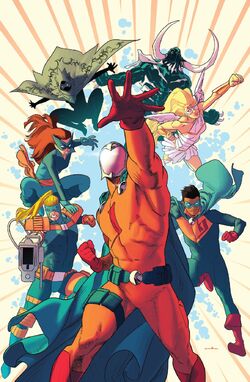 Allies
J-Squad, Justice for All

The J-Team was a group of powerless vigilantes local to Los Angeles funded in the 1970s by Justice when he debuted as a super hero at age sixteen. The roster was rounded out by Princess Justice, Mr. Swift, Little J and Marty. In the early days, the J-Tem was funded by Justice's family through their chain of steakhouses.

Justice and Princess Justice eventually married and they had a child named Matthew. Tragedy struck shortly afterwards with the death of Princess Justice on a mission. Justice focused full-time on crime-fighting, but the remaining members of the J-Team retired after Mr. Swift died, resulting in the team's disbandment.

Almost a decade later, Justice, having adopted the identity of "Doc Justice," reformed the J-Team as a crime-fighting school. Doc Justice and his sidekick Kid Justice were joined by Blue-J, the new Princess Justice, and an unidentified fifth member.[1]

The roster of the team kept changing throughout the years due to the death of their members, in some instances with new heroes stepping up and taking on the mantle of dead predecessors. The secret behind the J-Team's high mortality rate was due to Doc Justice routinely orchestrating the death of his protégés to raise his own profile as part of the sensationalization of his super hero life, believing that his mediatic image and the fortune that came with it helped him protect Los Angeles.[2]

At one point in time, the J-Team branched into the J-Squad, and in the 1990s, Doc Justice led the unmemorable team named Justice for All.[3] When Matthew was a teenager, he begged his father to take him on as the second Kid Justice,[1] and he eventually became involved in Doc Justice's schemes to kill his teammates. Matthew's contemporaries were the third Princess Justice, SPF, and Trench. When Doc Justice disappeared for roughly a year, he was secretly replaced by the then-current Justice Princess.[1] During a staged mission called "Operation: Clear Slate," Doc Justice buried Matthew's super heroic alter-ego, and he started running Mission Control for his father. In the mid-2000s, the J-Team disbanded after another tragedy.[2]

Oportunity arose for Doc Justice to reform the J-Team when the group of teenage heroes known as the Runaways sought his help after being forced out of their underground hideout by a public drainage work. Victor Mancha was a big fan of the J-Team, and offered to assist Doc Justice in a mission. The rest of the Runaways followed suit, donning the costumes of past members of the J-Team as well.[3] After this initial mission, the Runaways were consolidated as a new J-Team.[4] Victor became Kid Justice, Chase Stein donned BumpStock's costume as "Gun Arm," Nico Minoru became The Gloom, Molly Hayes became Blue-J, Karolina Dean became Princess Justice.[3] and Gib became Old God. Only Gert Yorkes was left behind, in part for her lack of combat ability and because Doc Justice didn't see her physique suitable for the media. During missions, she stayed behind with Matthew at Mission Control.[1]

This new J-Team enjoyed a burst in popularity, and they continued working with and being trained by Doc Justice for weeks.[5] However, after failing to secure a contract for a TV reality show, Doc Justice decided to kill off Karolina Dean for an attention bump. He led the J-Team into a trap for Karolina, pitching her against former J-Team member SPF, who possessed the ability to absorb solar energy.[2] Gert had become increasingly suspicious of the J-Team's high mortality rate,[1] and eventually snooped through Matthew's computer, where she discovered the truth behind it.[2] She rushed with her pet dinosaur Old Lace to intercept the J-Team's mission. Matthew tried to stop her, but she convinced him to help her.[2]

Gert and Matthew managed to barely stop Ashley from killing Karolina, and Doc Justice fended himself against the rest of the Runaways. When he was holding Gert at gunpoint, Victor Mancha arrived and immobilized Doc Justice long enough for Old Lace to sink her teeth on him, ending his life. Matthew tended to SPF while the Runaways left the scene.[6]

Retrieved from "https://marvel.fandom.com/wiki/J-Team_(Earth-616)?oldid=5716182"
Community content is available under CC-BY-SA unless otherwise noted.