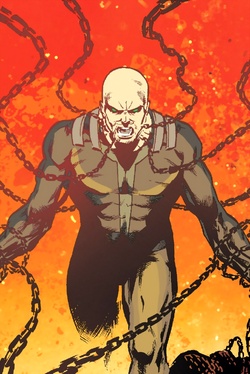 Jack Chain was one of the newly-manifested Nuhumans, and a member of Lash's tribe. He used chains made of Darkforce to hold Haechi prisoner when he was brought to Jakarta.[2]

Some time later, Chain accompanied Lash to confront Black Bolt, and they kidnapped his protégée Blinky.[3] When the psychic vampire Jailer took over Blinky's body, he got hold of Chain and fed on him, killing him.[1]

Darkforce-Chain Manipulation: He can generate and control the Darkforce form of chains.[2]

Like this? Let us know!
Retrieved from "https://marvel.fandom.com/wiki/Jack_Chain_(Earth-616)?oldid=5550830"
Community content is available under CC-BY-SA unless otherwise noted.