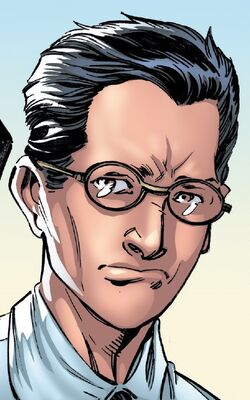 Do you know why I took the name Patient Zero? Because I was infected... not by a disease but by "men." Peter Parker and Wade Wilson. A life tainted by fools. Everything that's happened... And will happen, was bought and paid for long ago.

Jack Hammer was an exceptional student at Empire State University studying chemistry. He was a member of the university science club alongside Peter Parker and hoped to graduate and get a job at Osborn Chemicals. Parker was going to apply for the same job however, making them rivals. He had a huge crush on Gwen Stacy.[8]

Weapon X attacked Deadpool at Weasel's place, looking for information and this is what they are fighting each other to try to get. The only problem was that neither one has the information the other is needing. They tore up the place and then Weasel finally stopped them and brought this realization to them and Weapon X left.[10] In Cairo, Deadpool called Weasel from the airport and he told him the flight that Black Tom and Juggernaut were leaving on and then he told it was leaving right then for Dublin.[11]

The Executive Elite tried to take out Deadpool only to found out what he knew about Tolliver's will. Unfortunately, this was a trap so Weasel could get his hands on the disc that they had. Deadpool took out Makeshift and Rive, while Weasel took out Commcast and got the disc. He combined it with theirs and learned that the prize was in Nepal.[12]

They found Tolliver's estate and broke in, taking out the monks that lives there, only they'd been followed by Weapon X. Inside, Slayback was waiting for them with Copycat, they all begin to fight, but accidentally activate Tolliver's weapon in the process - an A.D.A.M. Unit. It neutralized and completely disintegrated Slayback, and was about to do the same to Deadpool when he told it that he was the only thing that could save Copycat's life. He had her absorb some of his healing abilities, and she began to heal from being impaled by Slayback earlier. The A.D.A.M. Unit then left, as did Weapon X, saying that he was tired of hating Deadpool's guts. Deadpool felt like he'd turned over a new leaf, and took some gold items from the monastery as payment.[12]

Weasel was later seen acting as an armored security force in Las Vegas going by the name "The House". After battling Deadpool (and temporarily defeating him), the Merc offered to work with Weasel as his sidekick using a secondary set of armor and the name Wildcard. During a battle with Grizzly, Wildcard then made House look useless, so the next time Deadpool proposed that Weasel switch identities and take the credit for Wildcard's heroics. During a second fight with Grizzly, Weasel made Wildcard look like the hero of the fight, while Deadpool (as the House) stood by doing nothing and subsequently escaping with Grizzly and the stolen money. Now that House had become a criminal, Weasel tried to defeat Deadpool in battle, but the Merc escaped despite seemingly being killed by Weasel (still as Wildcard). When Wildcard's bosses tried to find a body inside the House armor there was nothing, so Weasel couldn't clear his name and remained a fugitive, while Deadpool resumed the identity of Wildcard (although he renounced it shortly thereafter).[13]

Deadpool subsequently captured Weasel and kept him locked inside the Box, a dark room full of sharp objects. Hammer was accidentally freed by Macho Gomez, a recent foe of Deadpool who was looking for Wilson. With Weasel's help, Macho Gomez assembled a group of villains and former allies of Deadpool that confronted him when he returned from a brief adventure in space. After killing Deadpool, albeit temporarily, the team split apart.[14] In the wake of their murder plot, Macho Gomez killed Weasel.[15]

While in Hell, Weasel struck a deal with Mephisto. Weasel returned to the land of the living in exchange of taking part in a plot to ensure Mephisto got hold of Spider-Man's soul.[15] Under the moniker of Patient Zero, Weasel put a plan in motion, and contacted Deadpool to have him kill Spider-Man's alter ego, Peter Parker. In order to convince the mercenary that Parker was evil and deserved to be killed, Patient Zero also hired Mysterio to stage a massive hallucinogenic attack in New York which allowed him to sneak into Parker Industries and forge evidence to involve Parker Industries in illegal and cruel experiments on humans.[16][1]

Once Deadpool killed Peter Parker, Patient Zero impersonated him and extracted every piece of data Parker Industries had on genetic splicing. Deadpool discovered he had been duped and had decided to call in a favor from his ex-girlfriend, the personification of Death itself, to bring Parker back to life.[3]

Deadpool decided to get revenge on Patient Zero, and traced his money deposits back to his base, a glass house. Spider-Man followed Deadpool, and together they confronted Patient Zero and his Manstrosities. Once the villain confirmed Spider-Man's theories regarding his involvement in the recent events that affected Parker's life, Patient Zero taunted them, noting that they yet hadn't discovered his motives nor his true identity. After hinting a connection between the three of them, Patient Zero activated a conductor meant to attract the glass that composed his base to Spider-Man and Deadpool in order to pierce them with shards of glass, and teleported away.[1]

Weasel then resumed his plans, and used the data on genetic splicing to create Itsy Bitsy,[1] a psychopath with both Spider-Man and Deadpool's powers meant to push Spider-Man to his limits.[15] After letting Itsy Bitsy loose, Patient Zero decided to turn to the heroes for protection as soon as he found out his creation's views differed from his. Before he could disclose any information or even reveal his true identity, Patient Zero was abruptly and unceremoniously cut into pieces by Itsy Bitsy.[17]

The next time Deadpool temporarily went to the afterlife while he regenerated back from death, he confronted Patient Zero, and got him to reveal his identity and plans between his sessions of torture.[15] Following Itsy Bitsy's defeat and the eventual failure of Mephisto's plans, the Hell lord got Weasel to keep working for him by turning his eye to a new target, the person who played a key role in thwarting the corruption of Spider-Man's soul, Deadpool himself.[18]

Through unrevealed means, Weasel returned to the land of the living in his normal human form. He fell in love with a woman named Clarice and married her. Weasel initially hoped to lead a normal life, but found it was hard to let go of his past hobbies. Since Clarice had no idea of his criminal life, Weasel decided to continue working as a weapons dealer discreetly.[19]

During one of his jobs, Deadpool crossed paths with the Assassins Guild and killed several of their operatives, angering Belladonna.[20] In retaliation, she sent agents to Weasel's house, which resulted in Weasel telling Clarice about his secret job. Weasel and Clarice were saved by Deadpool and his protégée, Threnody, and taken to the Hellhouse to lie low.[21] When Deadpool raided the Assassins Guild's headquarters in New Orleans, he took Weasel, Clarice and Weasel to a motel nearby. Assassins Guild agents tracked them down, but Deadpool had prepared a trap, misleading the Assassin Guild into checking a room rigged with explosives, which gave Weasel and Clarice a window to escape. However, Weasel was impaled from behind by a mercenary that was waiting for them in their escape vehicle. Before Threnody took off with Clarice, she got to tell Weasel that she was pregnant. Deadpool found Weasel when he returned to the motel, and he died almost immediately afterwards, telling Wade he always knew he'd die looking at his ugly face.[22]

Weasel was sent back to Hell, where he made a new deal with Mephisto. If he could get Deadpool to become Mephisto's personal assassin and soul-collector, then he would be resurrected once more. Weasel manipulated Frank Mueller into becoming Deadpool's nemesis 'Good Night'. If Wade refused to work for Mephisto, he would have Good Night take Deadpool's daughter Ellie under his wing, and redefine what it meant to be a hero for her. This would corrupt her and result in Ellie becoming Mephisto's assassin instead. Once Deadpool learned of the plan, he reluctantly agreed to work for Mephisto, and Weasel was sent back to live on Earth - without Patient Zero's fiendish powers.[23]

Genius Intelligence: Hacker, inventor, knowledge of many weapons,[24] as well as an aptitude for science, including genetic engineering.[1]

The strength level of an average non-athletic male.[24]

Like this? Let us know!
Retrieved from "https://marvel.fandom.com/wiki/Jack_Hammer_(Earth-616)?oldid=6511810"
Community content is available under CC-BY-SA unless otherwise noted.