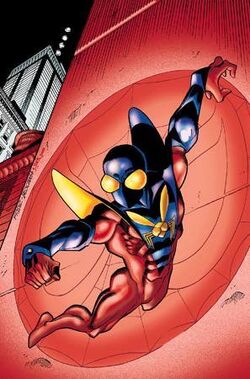 Jack Jameson, or JJ as he is called by his friends, was attending a demonstration of Project: Human Fly by his grandfather J. Jonah Jameson, C.E.O. of Jameson Communications (and publisher of the Daily Bugle). The goal of the project was the creation of a body armor that would grant wearer insect-like superpowers. The staff of the project included Dr. Marla Jameson (Jonah's wife), biophysicist Dr. Sonja Jade and Richie Robertson, grandson of the late Joseph "Robbie" Robertson. It was on this day that JJ first met Buzz Bannon, a former Navy SEAL and the person chosen to use the Human Fly armor. In the following time, they became close friends, almost like brothers. Then one day, as JJ and Buzz were in the gym, they got a message that Buzz should attend a meeting on the Project: Human Fly, but it was a trap.[citation needed]

Dr. Sonja Jade turned out to be a traitor who was holding Marla and Jonah Jameson, and Buzz Bannon hostage. She was about to steal the project files and the armor itself. While her minions were going with Buzz to retrieve the armor, JJ and Richie Robertson learned of the situation and triggered the fire-alarm. Buzz used the distraction to overcome most of his adversaries, but during the fight he got a shot in the abdomen and Richie was beaten unconscious. Nevertheless, Buzz managed to knock down all the men and went for the armor, joined by JJ.[citation needed]

Suddenly, the Human Fly entered the scene, rescued the hostages before they could get shot and went after the villains, Dr. Jade was able to get away due to an explosion. Later on that evening Buzz Bannon's body was discovered in the lab. JJ had donned the armor, but couldn't tell his grandfather (who in a fit a rage, accused the wearer of the Human Fly armor of killing Bannon). Although hearing this from a nearby rooftop, JJ knew that the body armor was his only chance at revenge for Buzz Bannon's death. He couldn't tell his grandfather anything about this and so kept it a secret. In memory of his friend, he decided to call himself The Buzz.[citation needed]

Later JJ was joined by Richie who knew he was The Buzz because he regained consciousness on that day and followed them to the lab where from a distance he saw Buzz Bannon die. Richie agreed to help JJ with the armor, operating from a van equipped with a lot of electronics. They stay in contact via radio signal. With Ritchie's help, The Buzz was able to find and defeat Jade.[citation needed]

The Buzz soon encountered Spider-Girl (who, unknown to JJ, discovered his real identity), and despite his good intentions, she was leery of him, since she had been reading articles in the Daily Bugle (written by Jonah Jameson) that Buzz was a murderer (ironically, the same kind of articles he used to write about her father, Spider-Man). Buzz, however, was able to win her over, and even helped her form a new team of New Warriors, (including Ladyhawk, the Raptor, Darkdevil, and Phil Urich (the good Green Goblin). He is currently considered to be active duty. Recently, he was attacked by the Hobgoblin but thanks to his suit he suffered only minor damage.[citation needed]

The Human Fly armor: the armor gives The Buzz the powers of superhuman strength and flight. His gauntlets can fire blasts of electricity (his "Bug Zapper") or ribbons of adhesive polymer (his "Fly Paper"). His goggles give him 360-degree vision.

The neural interface of the armor is bonded specifically to Jack Jameson and will not work for anyone else.

Originally referred to only as "JJ", Jack Jameson's full name and relation to Jolly Jonah was revealed in Spider-Girl #18.

Like this? Let us know!
Retrieved from "https://marvel.fandom.com/wiki/Jack_Jameson_(Earth-982)?oldid=6076152"
Community content is available under CC-BY-SA unless otherwise noted.