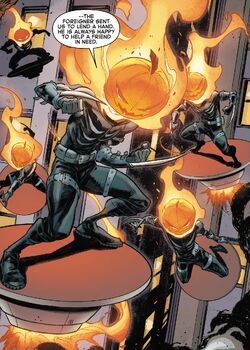 A group of mercenaries employed by Foreigner. They fought against Spider-Man and his sister Teresa when they tried to capture Chameleon, who was selling the Infinity Formula to the Foreigner.[1]

The Foreigner later deployed the Jack O'Lanterns when he cornered Chance into accepting a bet to attempt to steal a web-shooter off Spider-Man. Since succeeding would force him to cover all the debts of the wagers of his casino, the Palace, Chance tried to fail on purpose. However, the Jack O'Lantern's intervention allowed him to fluke the challenge when one of the Jacks sliced a web-shooter off Spider-Man's wrist and it fell on Chance's hands.[2]

Retrieved from "https://marvel.fandom.com/wiki/Jack_O%27Lanterns_(Earth-616)?oldid=5690620"
Community content is available under CC-BY-SA unless otherwise noted.