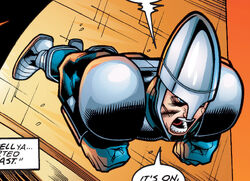 Jack Pulver was born in Burbank, California. He was a member of the criminal organization, the Circus of Crime, and worked as a human cannonball and acrobat who specialized in being shot out of a cannon. He wore a costume and helmet that protected him from injury. In a battle with the Hulk, he had himself shot out of his cannon at the Green Goliath with no other weapon but a replica of Thor's hammer. The Hulk punched him right up through the top of the circus tent.[2]

When the Circus of Crime next appeared, Jack had changed his outfit, replacing the crash helmet with a metal bullet-shaped hat so he could use his head as a battering ram. It didn't help him. Spider-Man and Daredevil rode him through the air like a bucking bronco and steered him into a crash with a group of circus rubes.[1]

Frustrated by this defeat, Cannonball was more than willing to throw in with the Clown, Princess Python and Great Gambonnos. They kicked the Ringmaster out and became the Masters of Menace, a name Princess Python thought up, led by the Clown. He soon returned to the Circus of Crime.[3]

Human Cannonball later appeared as a member of the Hood's gang.[4]

He wears padded armor with his costume and uses a trailer-mounted air cannon to fire himself at his victims or into the scene of a crime, such as onto high buildings.

Occasionally, he uses a mace to swing at opponents as he flies at them.

Like this? Let us know!
Retrieved from "https://marvel.fandom.com/wiki/Jack_Pulver_(Earth-616)?oldid=5520978"
Community content is available under CC-BY-SA unless otherwise noted.