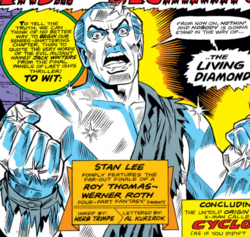 Jack O'Diamonds was a criminal and early X-Men foe. While Scott Summers was running away from his orphanage because of his emerging powers, he ran into a forest around where Jack was.[3] Jack used his mental powers to get Scott to join him. He revealed to Scott that he had gained his powers from accidentally combining isotopes from a lab where he had been working. The combined isotopes caused an explosion, and he had to be hospitalized. After his recovery, he found that he gained his mental powers and hands of diamond. He planned on using Scott to aid him in stealing more isotopes because he planned on using them to increase his powers. He eventually had himself receive more radiation. His whole body then became diamond, not just his hands.[4] Through Professor X's intervention, he and Scott were able to stop Jack by using a vibration beam, which shattered Jack into many atoms-as Jack refused to submit even if Xavier explained that Jack was unstable and in danger.[5]

Living Diamond was made into a zombie by Black Talon to be a part of his team, the X-Humed.[6] They were defeated by She Hulk.[7]

Like this? Let us know!
Retrieved from "https://marvel.fandom.com/wiki/Jack_Winters_(Earth-616)?oldid=4893825"
Community content is available under CC-BY-SA unless otherwise noted.