Will O' The Wisp 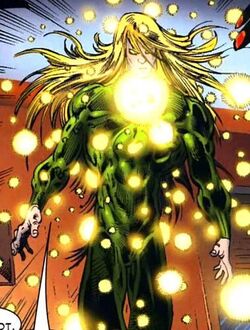 Jackson Arvad was the chief scientist for electromagnetic research at the Brand Corporation, a subsidiary of the Roxxon Oil Company. His superior in the Brand bureaucracy, James Melvin, drove Arvad relentlessly to develop projects for Melvin under the threat of being fired.[3]

During a laboratory mishap, a gravitic energy surge shattered the "magno-chamber" in whose vicinity Arvad was working. The accident plunged Arvad's body directly into the magno-chamber's self-sustained electromagnetic field, and the residual high frequency field weakened the electromagnetic attractions between the molecules of Arvad's body. This caused the molecules of Arvad's body to gradually disperse. Melvin held Arvad in the magno-chamber long enough to question him on any useful scientific applications the accident might have had, and then left Arvad to die.[3]

Will O' The Wisp

Arvad soon discovered, however, that he possesses a certain degree of mental control over the dispersion of his body's molecules. Unfortunately, every time he relaxed control over his molecular cohesion, it was more difficult for him to resume a solid state. Finally he began to fear that his body's molecules would drift apart and he would be unable to reintegrate them. He contacted criminal scientist Dr. Jonas Harrow, the man who gave Hammerhead and the Kangaroo their superhuman attributes, in a desperate attempt to find a cure for his deteriorating condition. Pretending to help him, Harrow implanted a tiny receptor in Arvad's skull with which he could disrupt Arvad's mental control over his molecules by means of a powerful mind numbing signal. Harrow then forced Arvad to carry out certain criminal activities, under the alias of the Will O' The Wisp, to further Harrow's ends. While committing theft, the Wisp encountered the crime fighter Spider-Man, who later tried to persuade him to resist the man controlling him. After much deliberation, the Will O' The Wisp finally decided to turn against Harrow rather than to jeopardize another innocent person. Realizing the Wisp's intent, Harrow activated the device in the Wisp's skull and dissipated him.[4]

Despite his corporeal disintegration, Will O' The Wisp's intelligence remained intact, and he eventually devised a scheme to reintegrate himself. Taking control of the battlesuit of the criminal Killer Shrike, the Wisp coerced him to kidnap scientist Dr. Marla Madison and bring her to the laboratory where he was originally transformed. There he was restored to corporeal form. The Wisp then destroyed the laboratory and fled into the night, plotting vengeance on James Melvin, the man responsible for the state he was in.[5]

Will O' The Wisp eventually got his opportunity for revenge against Melvin, but his better judgment stopped him from killing his ex-boss. Turning Melvin over to the authorities, the Wisp forced him to expose some of Brand's illicit activities to the news media. This exposure, brought about with the aid of Spider-Man, caused the shutdown of Brand's major plant in Long Island. Will O' The Wisp departed after that incident to contemplate what to do with his powers.[6]

Feeling indebted to Spider-Man, the Wisp resurfaced to help clear Spider-Man's name when he was accused of theft. This led to him meeting and interacting with several other superhumans and heroes.[7] After crossing paths, these heroes were deliberately reorganized into a team called the Outlaws on occasion, either as part of Silver Sable's Wild Pack or independently.[1]

Some time later, Wisp was temporarily forced back into Harrow's employ, until Ben Reilly helped him free himself from Harrow's control once again.[8]

For some reason, Will O' The Wisp joined Chameleon's team of "exterminators" to target Peter Parker after he revealed his identity to the public, but Spider-Man could barely remember who the Wisp was when they faced off.[9]

During the superhero Civil War; he was recruited into Hammedhead's criminal army to take advantage of the Superhuman Registration Act. Iron Man and a number of S.H.I.E.L.D. Agents raided their meeting and they were all arrested.[10]

He attended the wake for Stilt-Man but the Punisher blew up a bar after poisoning the guests.[11]

Freed from Ravencroft by Dark Carnage, Will O' The Wisp was recruited into the Cult of Knull alongside Freak and Conundrum; and bonded to an offshoot of the Grendel symbiote. Sent after Deadpool, he was seemingly killed when Deadpool pretended to be brainwashed and then stabbed him in the heart.[12] Surviving, he was eventually recaptured by the authorities and imprisoned in the rebuilt Ravencroft Institute.[13]

Will O' The Wisp possesses the power to exert conscious control over the sub-atomic electromagnetic particles that carry the force of attraction between the molecules of his body. This enables him to control his density, granting him such powers as superhuman strength, flight, and intangibility. Mentally willing himself to his maximum density, he can make his flesh and substance as hard as the mineral feldspar. At this density, his muscles become denser and stronger, granting him superhuman strength. Will O' The Wisp can maintain this state of density for about 10 minutes before fatigue forces him to let up. Mentally willing himself to his minimum density, Will O' The Wisp allows a non-critical number of random molecules to oscillate at a small distance from his body, granting him intangibility (unlike the Vision, who shunts his excess molecules extradimensionally, Will O' The Wisp disperses them omnidirectionally in this dimension). The process of dispersing his molecules produces a bright, sparkling light. Will O' The Wisp can also selectively solidify parts of his body. For example, he can keep his arm solid while making the rest of his body intangible.

Will O' The Wisp can fly by becoming lighter than air and expelling excess molecules in a single direction behind him, causing him to be propelled forward. When he travels faster than 5 miles per hour, the expenditure of molecular energy causes him to give off so much light that he appears to be an ethereal glowing sphere. Will O' The Wisp can fly at a maximum speed of 90 miles per hour, and because he is intangible while flying, he is not deterred by solid obstacles. It is not known how many molecules are needed to accelerate him at his maximum speed, whether he can replenish "shed" molecules, or if there is a limit to how many he can expel before doing himself injury.

In addition to his molecular powers, the Will O' The Wisp can mesmerize people into performing certain simple acts. To do so, he creates a short, highly accelerated oscillation of the energy states in the molecules of his chest, which causes a dazzling light. For reasons not fully revealed, gazing into this light puts the looker into a highly suggestible hypnotic trance, susceptible to the Wisp's commands. This hypnotic state generally lasts ten to thirty minutes, depending upon the subject's mental state and the length of exposure to the light.

Will O' The Wisp possesses superhuman strength enabling him to lift (press) approximately 12 tons while in his state of maximum density.

Like this? Let us know!
Retrieved from "https://marvel.fandom.com/wiki/Jackson_Arvad_(Earth-616)?oldid=6030368"
Community content is available under CC-BY-SA unless otherwise noted.