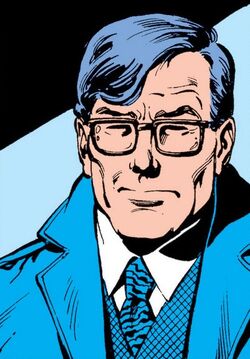 Jackson Weele was a corrupt businessman who embezzled money from his company. He hired Rocket Racer to steal documents that could incriminate him. Racer delivered the documents to Weele but withheld the Minerva Document, the most damning piece of evidence, for an additional $10.000 or else he would turn the evidence over to the authorities. Distraught, Weele went to the docks to commit suicide, but was saved at the last second by Racer, who still demanded full payment. Racer told Weele that with his Tinkerer-built, jet-powered skateboard, he could continue to hound Weele until he paid up. The mention of the Tinkerer gave Weele an idea.[3]

Weele hired the Tinkerer to create for him a weapon powerful enough to take on Rocket Racer. Inspired by Weele's name, as well as the disparaging nickname the Racer had given him, "Big Wheel", the Tinkerer created a giant, armored monowheel outfitted with machine guns and rocket launchers. Weele ambushed Rocket Racer while he was in the middle of a fight with Spider-Man. Racer tired to flee by weaving in and out of traffic but the Big Wheel just crushed all the cars in its path. Racer skated up the side of a building but, despite its great size, the Big Wheel followed. Spider-Man arrived at that moment to apprehend Rocket Racer. He managed to get Racer out of the way seconds before the Big Wheel would've crushed them. Unable to stop in time, the Big Wheel drove off the side of the building and fell into the Hudson River. Jackson Weele and the Big Wheel itself were presumed lost.[4]

Weele had in fact survived his crash and was arrested for his crimes. While in prison, Weele joined a twelve step program for super villains called Vil-Anon. Step nine of the program was to make amends with those he wronged so he decided to help Spider-Man fight crime. After a failed attempt at capturing Stilt-Man, and a successful, if destructive, attempt at stopping the Shocker from robbing a bank, Spider-Man encouraged Weele to follow a different career path. Weele started performing at monster truck rallies crushing cars.[5]

Eventually, Weele returned to a life of crime. He was recently apprehended by Spider-Man and Iron Man, and charged with having black market connections and selling illegal super hero equipment.[6]

Big Wheel was hired by Blackout to kill both Johnny Blaze and his brother, Daniel Ketch. Big Wheel was apparently killed by Blaze, who used his Penance Stare to do so.[7]

He survived, but was later killed when Foolkiller knocked him off a cliff.[8]

Weele drove a Big Wheel that was equipped with a variety of weaponry.

Like this? Let us know!
Retrieved from "https://marvel.fandom.com/wiki/Jackson_Weele_(Earth-616)?oldid=6105592"
Community content is available under CC-BY-SA unless otherwise noted.