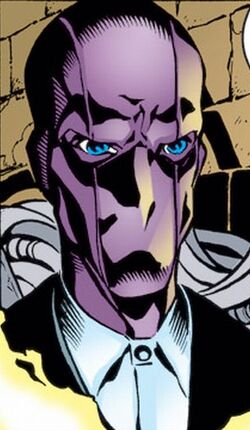 Hair
Black
Origin
Origin
He saved the life of Crime Boss Don Fortunato, he was repaid when given the identity of the Rose and part of Fortunato's gang territory to run..
Reality
Earth-616
Creators and Appearances
Creators
Marv Wolfman, Bob Brown
First Appearance
Daredevil #131
(March, 1976)
(as Conover)
Amazing Spider-Man #414
(August, 1996)
(as Rose III)

Jake Conover was a reporter for the Daily Bugle covering crime stories. When Bullseye made his first appearance as a criminal, he started by giving Conover an interview to make himself known[1].

Conover saved the life of the crime boss Don Fortunato. After being laid off from the Bugle, he grew a hatred for Joe Robertson and J. Jonah Jameson. He was given the Rose identity by Don Fortunato.[2][3]

Like this? Let us know!
Retrieved from "https://marvel.fandom.com/wiki/Jacob_Conover_(Earth-616)?oldid=6076231"
Community content is available under CC-BY-SA unless otherwise noted.