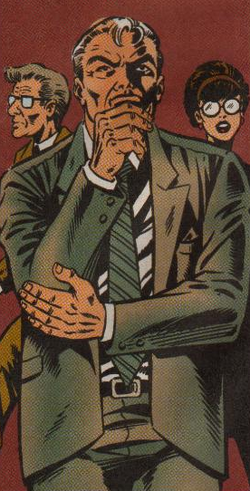 While investigating the Tannen crime family, Raven ran into Ben Reilly. Unknown to Raven, his partner, Louise Kennedy, was secretly working for Vincent Tannen. Jacob was kidnapped and his family was to be killed. Reilly managed to save them, although Jacob's wife, Helene, died from her wounds at a hospital.[1]

Reilly and his girlfriend Elizabeth Tyne were confronted by Raven and Kennedy. While they attempted to escape, Kaine appeared. Kennedy was killed while Raven was knocked unconscious. Believing Reilly responsible, he continued to follow him.[2]

As Kaine and Reilly surfaced in New York City, Jacob followed them. Finding prints that matched Peter Parker's at a scene, he had Parker arrested for the murders.[3] Kaine paid him a visit, giving him a lesser version of his "mark,"[4] and Reilly secretly traded places with Parker.[5]

Kaine confessed, to conceal Spider-Man's true identity, and was taken into custody.[6]

Like this? Let us know!
Retrieved from "https://marvel.fandom.com/wiki/Jacob_Raven_(Earth-616)?oldid=6030766"
Community content is available under CC-BY-SA unless otherwise noted.