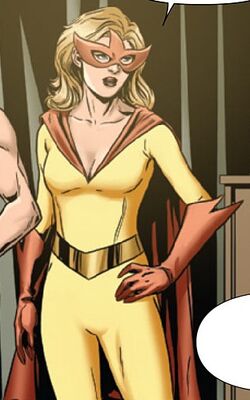 Now I can take my father's place -- as an Invader!

Lady Jacqueline Falsworth was the daughter of the British aristocrat, Lord Montgomery Falsworth, who had been known during World War I as the costumed champion Union Jack. In early 1942, Jacqueline was serving in Britain's Women's Voluntary Service when she was attacked by the vampire Baron Blood, an agent of Nazi Germany. Unknown to Jacqueline at this time, Baron Blood was actually her own uncle, Lord John Falsworth. Baron Blood was forced to flee by the original Human Torch, who took Jacqueline to her home, Falsworth Manor, where the Torch met her father. Lord Falsworth and Jacqueline befriended the Torch and his fellow members of the Invaders, a team of costumed adventurers who battled the Axis powers on behalf of the Allies during World War II.[5]

Baron Blood abducted Jacqueline but was defeated by Union Jack and the Invader Captain America.[6] Suffering from a great loss of blood from being bitten by Baron Blood, Jacqueline was rushed to a hospital by the Invaders.[7] There she received an emergency blood transfusion from the Human Torch. While she was recovering, the reluctant Nazi agent Blue Bullet attacked the hospital. To her surprise, the still-recuperating Jacqueline discovered that she could now move at superhuman speed. She courageously used her new powers to save the Human's Torch's life from the Blue Bullet's attack. The Blue Bullet was then defeated by another Invader, the Sub-Mariner.[8]

Jacqueline assumed that her new super-powers were a result of the combination of a foreign element introduced into her bloodstream by Baron Blood's bites and the artificial blood given her by the android Human Torch, though in later years she would discover they had actually jointly activated latent mutations in Jacqueline, granting her among others a mutant regenerative power.[4] Following her complete recovery from her injuries, Jacqueline made herself a costume, took the name Spitfire (after the British war planes of the period), and volunteered for Invaders membership. She was accepted into the team. Spitfire fought alongside the Invaders, including her brother who had become the new Union Jack, while the group was in the European Theater of Operations. At the war's end, she retired as a costumed adventurer.

In 1956, she married the British nobleman Lord Crichton. They subsequently had a son, Kenneth. Desiring a quiet life, Jacqueline informed people that her superhuman capabilities had gradually faded, though in truth they simply became more of a strain to use as she aged. After being widowed, Lady Crichton, as she was now known, moved back to Falsworth Manor to care for her aged father, who died a year after her return there. Lady Crichton continued to live in retirement at Falsworth Manor.

Later, Jacqueline helped assemble Namorita, Captain America, and Union Jack to aid the former Invaders, the original Human Torch and the Sub-Mariner, who were captured by the latest incarnation of the Nazi villain, the Master Man. In attempting to rescue their ally, Jacqueline was badly wounded, and survived only thanks to yet another emergency blood transfusion from the android Human Torch, which had a side effect of making her young again, her body reverting to look approximately 16 years old.[9] Lady Falsworth became involved in the day-to-day matters of Namor's company, Oracle, Inc., as she adjusted to her new situation.[10]

She later joined the New Invaders, but resigned with most of the other members after the Torch's death. She also had a brief relationship with the modern day Union Jack, Joey Chapman, but they broke up due to the large age difference.[11][12]

A short while later, she became aware she was beginning to display vampiric qualities, including fangs; finding she could control the bloodlust and remained unaffected by traditional vampire weaknesses, she initially kept this change secret, even from those closest to her. She joined MI13 as part of Britain's response to the Skrull Invasion by the Skrull Empire. In battle with two Super-Skrulls, Spitfire ripped out their throats with her teeth, openly revealing her new condition. When new MI13 recruit and vampire hunter Blade first met Spitfire, he staked her. She survived only thanks to the powers of fellow MI13 member Faiza Hussain, but later began a romantic relationship with Blade.[13][14]

During Dracula's attack on Britain, Jacqueline's vampire son Kenneth visited her and led her into a trap, where Dracula magically forced her into servitude and membership of the Vampire Nation.[15] While she initially resisted, it seemed that he was eventually able to convince her to become one of his minions. It was later revealed that Spitfire had been a double agent the whole time, always helping Pete Wisdom in gaining intelligence on Dracula's whereabouts.[16]

During the conflict between Atlantis and the Humans, she helped Captain America, the Human Torch and Toro when they asked for her help to track down Namor. She was able to conclude that he was going to attack Roxxon. They arrived in time to intercept the attack.[17] Later she fought with the rest of the Invaders to stop Machan from drowning the world.[18]

Sptifire is an exceptional natural athlete and fighter and has been trained by both her father and Captain America in several forms of hand-to-hand combat. She is also a trained pilot.

Spitfire possesses superhuman strength thanks to her vampiric state, lifting in excess of 1 ton. Thanks to her body's adaptations for running, her legs are stronger than her arms.

Like this? Let us know!
Retrieved from "https://marvel.fandom.com/wiki/Jacqueline_Falsworth_(Earth-616)?oldid=6442052"
Community content is available under CC-BY-SA unless otherwise noted.