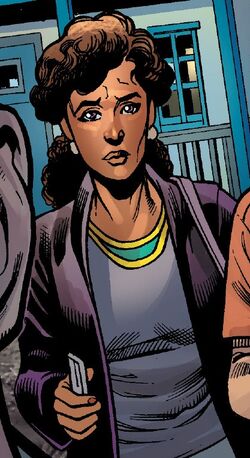 You wreck a city, and Doctor Strange looks a retirement home for you. Iron Man looks for a paradise planet to put you on. Your anger... it's indulged. Even respected. Mine is dismissed--if I'm lucky. We live in a world of--of men--white, college-educated men, men like Bruce Banner-- Who just rant and scream and rage and--smash things--and the world bends over backward to understand that. To reward it. So... yeah. I guess I'm asking. How do I get my piece of that pie, Hulk? How do I get to be what you are?

When she was fifteen years old, Jackie McGee's neighborhood fell victim to one of the Hulk's rampages, and her house was destroyed.[4] Her father overworked himself trying to pull their lives back together, and died due to the stress.[2] Ever since then, Jackie developed a secret obsession with the Hulk,[4] envying him for the fact that his destructive displays of rage had a place in the world while her anger was dismissed most of the time.[2] Jackie grew up to become a reporter for a local newspaper, the Arizona Herald.[5]

After rumors of the Hulk's return started surfacing following his death during the second superhuman civil war, Jackie began to trail him, gaining a reputation for being the only person actively looking for Bruce Banner.[1] When a multiple murder at a gas station in Arizona investigated by Jackie resulted in the first legitimate Hulk sighting,[5] McGee reported it, and the Arizona Herald broke the news.[6] Jackie continued investigating further sightings of the Hulk,[1] trying to feign objectivity despite her self-centered motives for pursuing Banner, which was to find out how to follow in his steps.[4]

Jackie's investigation caught the attention of Walter Langkowski, the gamma-powered Sasquatch,[1] who wanted her help to find Banner and seek his aid. When they heeded to a Hulk sighting in Minnesota, he was stabbed by an unordinarily enraged customer at a pub. He died in the hospital, and was resurrected under the possession of the spirit of Brian Banner, who was in turn being manipulated by the One Below All, a fiend who resided in the deepest layer of Hell, the Below-Place. Following a hunch from his alter-ego, Bruce arrived at the hospital.[6] As the Hulk, Banner confronted the possessed Sasquatch, and defeated him by draining him of gamma radiation. Following the incident, the Hulk confronted McGee and made her admit her reason for following him, but he dismissed her and left.[4]

Jackie continued investigating Walter's possession, becoming acquainted with the rest of Alpha Flight.[7] After the Avengers captured the Hulk and delivered him to the authorities, the covert Shadow Base took hold of him and disappeared him without a trace.[8] Captain Marvel appointed Langkowski to form a task force to find Banner, which became known as Gamma Flight.[9] McGee followed Gamma Flight to an encounter with the Hulk to Los Diablos Missile Base, where Brian Banner used a possessed Absorbing Man to open a Green Door above the site, sending everybody present into the Below-Place.[10] The process split the Hulk from Bruce Banner, whom Brian attempted to turn into the new vessel of the One Below All. Together with the McGee, the Hulk explored the Below-Place, and gave McGee the opportunity to fully express her resentment and call him out on his perceived privilege, even going as far as to admit that if she could become a gamma mutate, she would. During their voyage in Hell, Jackie and the Hulk encountered withered husks representing Rick Jones, Thunderbolt Ross, and Jackie's father.[2] The journey to Hell ended when the Hulk dispersed the One Below All before it could possess Bruce Banner, closing the Green Door. When everybody returned from the Below-Place, Jackie decided to step away from Gamma Flight due to the traumatic nature of the experience.[11]

Jackie was quickly pulled back into the world of the Hulk after her editor Murray assigned her to investigate the disappearance of Bruce Banner's ex-wife Betty Ross in order to keep making the headlines.[12] When returning to Ross' house a week after running out of material to publish, McGee stumbled into the mutated form of Betty Ross, the Harpy.[13] The Harpy took Jackie on her search for the Hulk, which took them to a motel in Reno, Nevada, where the Hulk was being attacked by Rick Jones, who had been mutated into an Abomination-like monstrosity by Shadow Base.[14] Harpy helped the Hulk fight Jones, and in the process, the Hulk saved Jackie's life when she was caught in the crossfire of Shadow Base support operatives. Hulk managed to retrieve Jones from within the shell mutating him, and escaped alongside Harpy and McGee.[15] They went on the run from Shadow Base until Jones awakened and provided them with the location of Shadow Base's headquarters. Hulk and his allies planned a raid on Shadow Base,[16] which resulted in Banner taking command of their operations.[17]

As a result of their coverage of the Hulk, the Arizona Herald was catapulted into a national newspaper, with an expanded staff and new offices in Phoenix.[18] Because of her experiences with the Hulk, Jackie started feeling more comfortable with the green monster and his world, but was conflicted due to his previous opinion of him. She additionally supported Banner's countercultural manifesto,[19] which pitted him against organizations like Roxxon.[18] Because of the Herald's association with the Hulk, their offices were one of four sites in Phoenix targeted by giant monster attacks orchestrated by Roxxon.[19] Jackie was saved by Rick Jones,[20] but the destruction and casualties caused by the attack put in doubt the future of the newspaper.[21]

After the tragedy in Phoenix, Hulk gained popularity among the people. So the mayor of Georgeville, Iowa invited Hulk to help in the town's reconstruction site. As always, Jackie was there to cover another "Hulk" article by which they could pay the funeral bills of their dead coworkers, but a sudden dose of gamma energy was sent into Hulk's body by Rick Jones possessed by Leader, causing him to overload and unleash a gamma blast which nearly killed everyone nearby other than McGee and some of the other reporters after being shielded by Rick.[22]

Then Gamma Flight came to apprehend Hulk for the disaster. Jackie tried to convince Gamma Flight that Hulk didn't mean to cause the blast and didn't want to fight, but Hulk went on the attack after Jackie accosted by Titania. Hulk was eventually captured by Gamma Flight.[23] Jackie accompanied Gamma Flight to their space station and informed them of Rick's strange behavior before and after Hulk's gamma blast, believing to be a connection. Her suspicions were confirmed when Doc Samson resurrected in Walt Langkowski's body and told her and Gamma Flight that it was the Leader's doing. She then witnessed Banner's Joe Fixit persona escape custody in Banner's body.[24]

Due to the monsters' attack on the Arizona Herald, there were cutbacks that resulted in layoffs. Jackie's new boss told her that the Board valued her but wanted to end investigative journalism and make her work on lists as well as cut her pay. Jackie chose to quit. When she returned to her apartment, she discovered Shadow Base's Dr. McGowan had teleported inside. McGowan told Jackie that she had been in search for gamma mutates and revealed to Jackie that she had been turned into one due to exposure to the gamma energy released by Hulk in Georgeville. Jackie didn't believe it at first until her powers manifested and saw strange creatures surrounding McGowan with her new enhanced vision.[3]

Jackie and Dr. McGowan teleported to Shadow Base Site B after detecting gamma energy there and discovered that the energy signatures were being given off by Rick Jones and Del Frye, who had been fused together. Puck, Shaman, and Doc Samson in the body of Sasquatch were also there and tried to convince McGowan that Rick and Frye weren't a threat anymore. Jackie meanwhile saw more strange creatures as well as the spirits of Samson, Rick, and Frye.[25]

After being accidentally exposed to gamma blast energy,[26] Jackie unconsciously developed superhuman abilities, such as:

Like this? Let us know!
Retrieved from "https://marvel.fandom.com/wiki/Jacqueline_McGee_(Earth-616)?oldid=6224120"
Community content is available under CC-BY-SA unless otherwise noted.