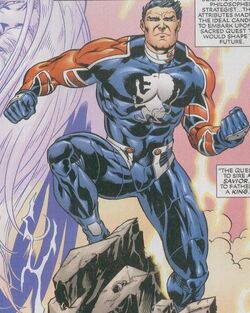 James Braddock was a member of the Captain Britain Corps working closely with Merlin, until he relocated to Earth-616 and purchased what was to become Braddock Manor. In a cavern deep under the manor house, James created what eventually grew to be a computer named Mastermind.

He then married Lady Elizabeth, becoming the father of three children; Jamie Jr., then ten years later the twins, Brian and Betsy.

Under the name of Brother he worked alongside Father and Mother at Weapon Plus in the World.[1]

At some point in his life, James Braddock joined the Hellfire Club and worked his way into the Inner Circle to eventually become the Black Bishop. Some years later his daughter Betsy attempted to take his position as Black Bishop in order to spy on them for S.T.R.I.K.E., but didn't make it very far. Afterwards, his son Brian made a more successful bid for the position and did become a Black Bishop.

Once his two youngest children were in college, while waiting for the son Brian to return home from a date with Valerie Campbell, James went to repair his computer, Mastermind. Lady Elizabeth joined him to keep her mind off the fact that Brian was late coming home. As the two were down in the lab working on a problem with the computer, Mastermind seized the opportunity and murdered both James and Lady Elizabeth.[2]

Assumed to be similar in nature to his son, Brian Braddock when he assumed the mantle of Captain Britain.

Like this? Let us know!
Retrieved from "https://marvel.fandom.com/wiki/James_Braddock_Sr._(Otherworld)?oldid=6119024"
Community content is available under CC-BY-SA unless otherwise noted.