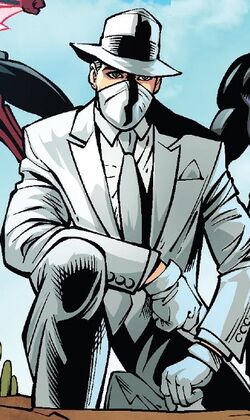 Miss: I am attempting to explain a device so profoundly complex that even if you were functionally immortal... which praise the singularity you are not... the Universe would collapse long before you grasped even how to switch it on. Pay attention or I shall feed you to my lab.

James Bradley was born on December 1st,[5] 1906 in San Francisco,[6] where his mother Catherine Price died during childbirth. His father, Dr. Nicola Bradley, created a power source for the first sentinel, and was impaled during its subsequent rampage.[5] James was presumably raised by his maternal grandparents, John and Mary Price.

During WWII, Dr. James Bradley worked with the late Phineas Horton in the creation of the Human Torch, aka Jim Hammond. The two ultimately parted ways and James struck out on his own, taking an unfinished android prototype they created together. Bradley activated the android and told him that he was Guy Newton, a young inventor who came up with the way to generate electricity in his body. Taking his word for it, the android began adventuring as a costumed hero named Volton.[citation needed]

Needing to earn money, Bradley became a doctor at Mercy Hospital in New York City. Somewhere along the way, he decided to become a superhero. Wearing a surgeon's mask and armed with a hypodermic needle gun of his own design, he fought crime as Doctor Nemesis.[citation needed]

In 1942, Bradley went up against a villain known as the Surgeon, who used trained rats to spread a version of the Black Plague on unsuspecting populated areas. He managed to stop the villain, only to discover that he was actually Dr. Blackston, the superintendent of another city Hospital.[7]

Some time after the incident, Bradley was approached by agents of the Third Reich who wanted to recruit them to their cause. Disillusioned by his experiences and feeling that his talents were underappreciated, Bradley agreed. Under their orders, he organized the Battle-Axis, a team made up of other disillusioned superheroes (plus Volton). At this point, he started calling himself Doctor Death and adapted a decisively more malevolent demeanor.[1] The Battle Axis embarked on a complex scheme that would force the USA to withdraw from the war. Known as Project Mojave, it revolved around the oscillotron, a device that Bradley invented. It was designed to cause a severe earthquake on the west coast that would destroy war industry plants and release poison gas from underground storage.[8] The idea was that the USA would have to leave the war to deal with the resulting crisis. Knowing the Invadersmight be able to stop them, Battle Axis tried to neutralize the heroes first.[9] Ultimately, the Invaders were able to stop their plan. During the battle, Volton switched sides and attacked Doctor Death with electric blasts. Bradley was left for dead.[10]

Unbeknownst to the Invaders and his Nazi superiors, Bradley survived.[3]

Repentant, he returned to his civilian job and resumed fighting crime as Doctor Nemesis.[3] Continuing his war on crime, he became engaged to his co-worker, Nurse Mary Strong. The majority of his wartime activities remain unrecorded.[citation needed]

When World War II ended, the still-repentant Bradley invented a biochemical processes to grant himself an extended life span, rebuilt his eyes to enhance his vision capabilities, and set out to track down escaped Nazi scientists in South America to stop them (and their creations), including Futurführer Nachtersteller and his cloned Genetikorps, from doing any harm. He eliminated them after sixty years of fighting.[3]

Among his fights, he at some time battled Nazi dolphins.[11]

His chemical cocktails ensured that he remained physically fit until the 2000s, and he kept his powers on M-Day.[12]

Warren Worthington and Hank McCoy approached Dr. Bradley while he was in Buenos Aires, hoping to recruit him to help them undo the "spell" that had turned the X-Gene off.[13] However, Bradley had no interest in helping them, as he was busy hunting test tube Nazis and superscientists.[14]

After an attempt on his life, Bradley decided to join the X-Club. They also gathered Madison Jeffries and Yuriko Takiguchi before returning to San Francisco to meet with Kavita Rao and discuss ways to save mutantkind.[15] Nemesis admitted that he might have joined the X-Men from nostalgia because they were settled in San Francisco, his place of birth. The first step was to look at pre-mutant DNA from Namor's era to discover what caused an evolutionary leap, and it was revealed by McCoy and Bradley that his parents were the best candidates of study on that subject, as he was born in 1906.[16]

X-Club travelled to 1906 to gather blood samples from James' parents. Though they succeeded, his father was killed during the rampage of the first sentinel that caused the 1906 San Francisco Earthquake. Before dying, Nicola asked for Nemesis' name, "James", finding it a good name for a boy.[6] Before returning to the present, James told his mother to bury the samples in the Golden Gate Park, as they couldn't come back with them. They later found that the Dreaming Celestial was standing on top of the samples. Nemesis then returned to the past to ensure his own birth, witnessing his mother's death.[5]

When Norman Osborn and his Avengers began policing the mutant population in California, Doctor Nemesis and the X-Club were key to Cyclops' plans. After rescuing Beast and Professor X from Osborn's prison, Nemesis and the rest of the X-Club joined the X-Men on the risen Asteroid M, renamed Utopia. Soon after the X-Men's relocation, they mourned the death of Yuriko Takiguchi. Later he and the X-Club were charged with preventing Utopia from sinking back into the ocean.[citation needed]

With the arrival of Hope Summers, attacks by Bastion and the Human Council became more severe. Doctor Nemesis and the rest of the X-Club were led into a trap that took them off of Utopia, where Bastion created an energy sphere blocking the entire San Francisco area from the outside world. Despite aid from the Avengers, the X-Club was still unable to breach the barrier.[citation needed]

In order to counter the massive unleashing of Sentinels over the world, Nemesis worked on the project of a Sentinel-specific EMP.[17]

During the attack at the Museum of Mutant History, Cyclops granted command of Utopia to him.[17]

As the X-Men leaders were waiting for Cyclops' decision over fighting or evacuating due to the approach of a giant Sentinel, Nemesis was in favor of evacuating the island,[18] and later tried to diffuse the conflict between Namor and Wolverine.[19]

When Hope projected blasts of energy again, with the form of the Phoenix, Nemesis was the one to confirm to Cyclops that that energy was a signal, and that people would notice it.[20]

During the Avengers/X-Men conflict, Doctor Nemesis stood among his kind, battling Iron Man after having taken down Quicksilver.[21] He regrouped to the X-Diaspora after Utopia's battle.[22]

As Hope created a device to make herself appear to telepaths at five different locations, Nemesis was sent to Wakanda along with Rachel Summers, Magma, Danger, and Storm.[23][24] He was shot with Black Widow's neurotoxin dart, making him delirious and incapacitated for a time.[25] He participated in tracking Hope and the Avengers along with the Phoenix Five, fighting in the Arctic Circle.[26]

When the X-Men turned over the Phoenix Five and joined the Avengers, Bradley was among them, but wasn't seen during the final brawl.[27]

At the end of the conflict, he postulated on joining the faculty staff of the Jean Grey School For Higher Learning, but wasn't selected by Kitty Pryde.[28]

He then retired into a well-guarded laboratory to perform science on his own, until Cable came to him, suffering from the depletion of his telepathic powers, and recruited him into his X-Force, banding with Domino, Hope, and especially Forge, in order to help Cable.[29]

Doctor Nemesis was of the many mutants that joined the mutant nation of Krakoa upon its creation. He was seen alongside many other Krakoans grieving Charles Xavier dead at the hands of anti-mutant superhuman criminals that had infiltrated Krakoa and killed many of its residents, including Xavier.[30]

It is later revealed that he is a member of Krakoa's science corps and is responsible for the creation of the krakoan drugs.[31]

While his abilities are strictly intellect based, they've allowed him to master many scientific and medical domains, and permitted him to create several inventions and granted him the following abilities:[3]

Like this? Let us know!
Retrieved from "https://marvel.fandom.com/wiki/James_Bradley_(Earth-616)?oldid=6512466"
Community content is available under CC-BY-SA unless otherwise noted.