James I of England 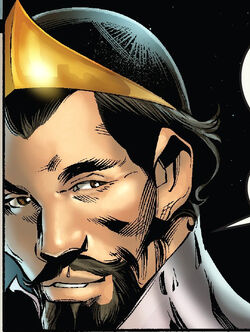 King James believed the Witchbreed were of the Devil and that unless they were killed, God would be displeased. When offered, King James accepted a deal made with the Grand Inquisitor. He would give the Inquisition all Witchbreed captured in England, if the Inquisition helped James become King and helped make the English more willing to have the Witchbreed killed. When Queen Elizabeth I was killed, James marched to London to take her throne and ordered Sir Nicholas Fury to go to Carlos Javier's school. James did not, however, come through with his part to deliver the Witchbreed to the Inquisition, and Fury betrayed him and freed the prisoners. James responded by imprisoning Fury's associates and beheading Dr. Stephen Strange. James sent his right hand man, David Banner, and Fury's assistant, Peter Parquagh, to the New World with orders to kill Fury, though their mission did not succeed.[citation needed] After his coronation, James was the first man to rule over Scotland and England and was making strides towards conquering Ireland. Then one night Matthew Murdoch paid him a visit in the dark of night and made James realize he was not invulnerable and threaten him to leave "his island" alone before disappearing into the night.[1]
Shortly afterwards, James was present when William Shakespeare was kidnapped by Vulture Fliers, as he was "correcting" Shakespeare's portrayal of King Macbeth.[2]

Later, James had since not heard of David Banner, who unbeknownst to James became the Hulk and dispatched Lord Irons to recover his advisor in the New World. Four months later, after Banner willingly turned himself in and returned to England, James was acknowledged of his former advisor's treachery for defending the Roanoke colony's independence, and sentenced him to the stake. At the execution, James leisurely watched in front of Banner's execution but for him to turn into the Hulk and subsequently killed the king.[3][4]

Like this? Let us know!
Retrieved from "https://marvel.fandom.com/wiki/James_Charles_Stuart_(Earth-311)?oldid=5683649"
Community content is available under CC-BY-SA unless otherwise noted.