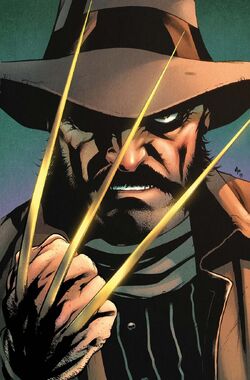 James Howlett was Governor-General of Dominion of Canada, and Viceroy of Her Majesty's Expedition to Shangri-La. He had several adventures with Hercules, the pair becoming their world's greatest heroes.[1] They eventually began a romantic relationship, but were forced to keep it secret because her majesty forbid homosexual relationship[2] and Zeus forbid any god but himself from consorting with mortals.[1] Hercules gave Howlett the mystical Adamantine metal, which was later bonded to his skeleton.[3]

On the day Howlett and Hercules defeated a large dragon-like monster attacking Canada, they revealed their love. As punishment, Zeus banished the couple to the pits of Tartarus where together they fought damned souls for nearly the next four years,[1] until Howlett was abducted by Savior.[4]

After Howlett was abducted by Savior, he was trapped and used as a mutant power source.[4]

Howlett aided Cyclops from Earth-616 and others in escaping from the machinations of the Savior.[5] Afterward, he joined a group of multidimensional X-Men.[6]

Together with his new team, Howlett began hunting down evil Xaviers across the Multiverse. Howlett formed a close friendship with Dazzler, and a parental relationship with Kurt Waggoner.[7]

When Kurt was lost in the Multiverse during a jump, Dazzler and Howlett refused to go on until he was rescued. Xavier sent them to Kurt's reality, but felt he needed to continue to hunt down evil Xaviers,[8] and recruited a new team with Howlett's former lover, Hercules, on its roster.[9][10]

When the X-Men rejoined Xavier, Hercules was overjoyed to be reunited with Howlett,[9] and the pair began fighting side-by-side once again.[11]

Like this? Let us know!
Retrieved from "https://marvel.fandom.com/wiki/James_Howlett_(Earth-12025)?oldid=6121362"
Community content is available under CC-BY-SA unless otherwise noted.