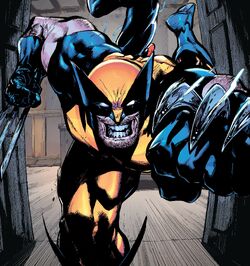 Wolverine was thought to be among those killed by the Regent in his rise to power,[1] but he, along with several other X-Men, survived the experience. It was also revealed that he married Jean Grey and had a daughter named Kate.[2]

Seemingly those of the James Howlett of Earth-616.

Seemingly those of the James Howlett of Earth-616.

Like this? Let us know!
Retrieved from "https://marvel.fandom.com/wiki/James_Howlett_(Earth-18119)?oldid=5671231"
Community content is available under CC-BY-SA unless otherwise noted.