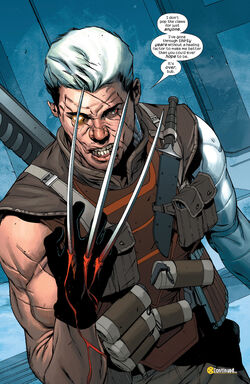 Cable's life was identical to the present time Wolverine, until Apocalypse arrived and battled the X-Men. Many of the team died during the battle, and Apocalypse absorbed Cable's healing factor and ripped off his left arm. Some time after the battle was over with Apocalypse the victor, Cable's left arm was used against him and it scarred his face. Because of his lack of healing factor, the scarring on his face remained.

Cable then spent the next three decades fighting Apocalypse until he finally found a way to travel back in time, and as soon as he could Cable traveled back 30 years to correct the past.

Cable traveled from the future, appearing before Charles Xavier. Cable prepared to kill Xavier, claiming it to be necessary. However, he hesitated, allowing Charles to defend himself telekinetically.

Xavier asked Cable how he was blocking Charles' telepathy, but the man refused to reveal how, calling it a "secret". Cable then tossed a small device at Xavier, which attached itself to his head and (painfully) rendered him powerless. However, Kitty then arrived, and phased Cable through the floor. Cable stabbed her in the gut, and warned her not to become solid again, not even enough to remove the knife, or she will bleed to death. He then apologized for putting her in this situation.

Cable proceeded to face each of the X-Men, defeating them all: he knocked Colossus unconscious, deflected Cyclops's blasts with his metal arm (burying Cyclops in rubble), defeated Jean with the same device he used against Xavier, and attacked Storm with a device that turned her own powers against her.

When he was attacked by Wolverine, he held his own for a while, until the X-Man flew into a rage, attacking Cable mercilessly, until he was pushed back, speechless from the claw marks crossing his chest.

Cable was then revealed to have unsheathed claws identical to Wolverine's from his organic arm.

As the X-Men believed the Professor to be dead, Cable actually transported him back to the future to prepare him for the battle with Apocalypse. Bishop, who had pretended that he was against Cable, was trying to build an X-team strong enough to defeat Apocalypse. When they returned to the present, SHIELD was attacking Apocalypse, who defeated them with ease.

While Apocalypse was able to repel all attacks with ease, Xavier (Onslaught outfit) said they're too late, but Cable (Stryfe outfit) was confident. Xavier almost immediately revealed who he is to Jean while Apocalypse beats S.H.I.E.L.D. agents.

Meanwhile Jean was momentarily shocked about the professor being back, and Jean, Cyclops, Toad, and Iceman were no longer in Apocalypse's control due to Xavier's honed abilities. Cable revealed that he and Bishop were in it together all along and that Professor X was the key to stopping Apocalypse.

Wolverine jumped in at the end of Cable's explanation and told them all to start fighting. Professor X and Jean shared a tender moment on a rocky peak, told her what to do and then Apocalypse jumps in.

Xavier tried to wipe out Apocalypse psychically, but Cable's plan backfires as Apocalypse somehow resisted. Apocalypse destroyed Xavier's helmet, giving him a bloody nose, and as he was about to kill Cable, Xavier used his enhanced telekinesis but to little effect.

As Apocalypse was about to kill Xavier, Jean begged the Phoenix force to help him, to which it told her it knew she would eventually beg for it. The Phoenix Force was then unleashed and stated: "I AM FREE! Now you face the wrath of Phoenix!"

After battling, Jean destroyed Apocalypse, reverting him back into Sinister followed by her making sure no one remembers Apocalypse except for the X-Men. Sinister's fate afterwards is left unknown. The people who had died came back to life and Wolverine's body/healing factor were fully restored, effectively diverting the possibility of his becoming this version of himself.

Cable is an exceptional strategist and tactician, and adept with most weapons and fighting styles.

He carries a variety of weapons, including guns, grenades, shuriken, incapacitating gas, limpet mines, brain drones to disable telepaths, and shock bracelets and power dampeners to prevent other mutants from accessing their powers. Many of these weapons are stored in his bionic arm, able to be fired at will; the arm is also able to reflect energy attacks and deliver electric shocks. He also has an Adamantium skeleton, and claws in his right arm, though they are rarely used, as without his healing factor he injures himself whenever he extends them

Like this? Let us know!
Retrieved from "https://marvel.fandom.com/wiki/James_Howlett_(Earth-2107)?oldid=5580409"
Community content is available under CC-BY-SA unless otherwise noted.