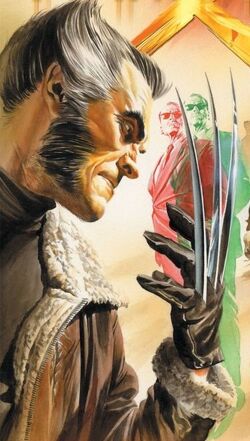 Days of Future Past

Logan was originally thought to be a mutant having been born with extraordinary powers, however when X-51 of Earth-9997 looked into Logan's past, it appeared as though Logan had descended from a tribe of humans known as the Moon People, who avoided genetic manipulation by the Celestials during the First Host millions of years ago. If this lineage was true to the Logan of Earth-811, Earth-9997 or every Logan in the Multiverse has yet to be determined.[citation needed]

The Wolverine of Earth-811 existed in a time chronologically 33 years ahead of the modern era of Earth-616. The past of Wolverine of Earth-811 is as yet unrecorded, however it can be assumed that it is similar to that of his Earth-616 counterpart (at least aspects of his boyhood in the Howlett home and experiences in Weapon X).[citation needed]

33 years in the past of Earth-811, the Brotherhood of Evil Mutants had succeeded in assassinating US Senator Robert Kelly. As a result, the "Mutant Control Act" was passed, instating the robot Sentinels as America's protectors from the mutant menace. The Sentinels eventually took over the United States and most superhumans were either placed in prison camps or killed.[citation needed]

Wolverine's first recorded mission found him searching for Amiko, his foster daughter whom he originally thought was dead. He soon found himself wrapped up in a plot by the Red Queen and Shinobi Shaw. He was also enlisted by Magneto to help find his daughter, the Scarlet Witch. Defeating Shaw and his plot to recreate the Council of the Chosen, Wolverine finds Amiko and the Scarlet Witch (however the latter dies and Magneto is crippled) and returns to North America to fight in the resistance.[1]

Eluding the Sentinels and becoming part of the Canadian resistance movement, Wolverine worked toward finding a way to destroy the Sentinels before the European government acted with a preemptive nuclear strike against North America.[citation needed]

Wolverine began sneaking into the United States to smuggle parts of a device to Kate Pryde, one of a few camp prisoners allowed to make supply runs. The device that Kate was building would temporarily disable the inhibitor collars that she and the remaining X-Men (Colossus, Storm, Rachel Summers, Franklin Richards and Magneto) were forced to wear, allowing them to escape.[citation needed]

Part of their plan was to send Kate's consciousness back in time to her younger self, attempting to prevent the assassination of Senator Kelly. Kate succeeded in this mission, however instead of fixing the time line, it created a divergent reality.[citation needed]

The second part of the plan was for the remaining members of the team to escape the Sentinel camp and rendezvous with Wolverine, Magneto sacrificing his life to make this possible.[citation needed]

Meeting up with Wolverine, the X-Men make their way toward the Baxter Building, former home of the Fantastic Four and current Sentinel base. Attacked by Sentinels along the way, Franklin Richards is killed in battle.[citation needed]

Arriving at the Baxter Building, the group leave Rachel behind with the comatose Kate as they infiltrate the building. Wolverine gained access using a duplicate signal belt the Fantastic Four used to gain entrance to their private penthouse on the Baxter's top floor.[citation needed]

In the Fantastic Four's main lab, the remaining X-Men confronted a number of Sentinels. Colossus executes a "fastball special", throwing Wolverine towards one of the Sentinels. The robot blasts Wolverine, totally vaporizing his body except for his Adamantium skeleton. Storm and Colossus were also killed shortly thereafter. Rachel and Kate were the sole survivors, escaping to fight another day.[citation needed]

This would not be the end of Wolverine of Earth-811, as he would be resurrected twice. Before his incineration by the Sentinels, Wolverine was plucked by the "Timebreakers", insectile creatures trying to repair alternate realities, to be part of a new team of Exiles (the original team having been "fired"), the Timebreakers felt that the best way to get the job done would be to have an entire team of Wolverines from alternate realities. This plot didn't workout so well considering the mission brought each alternate Wolverine to Earth-127, a reality where a entity known as Brother Mutant (a fusion of Magneto, Mesmero, Scarlet Warlock (the Scarlet Witch of Earth-127), Quicksilver and Wolverine of Earth-127) would enslave them.[citation needed]

Wolverine of Earth-811 would lead a group of Wolverines (and an alternate version of robots Elsie-Dee and Albert) against Brother Mutant, and sacrificed his life to stop him, having his body blasted away in much the same way as he did on Earth-811. Following the reinstatement of the original Exiles, it is presumable all the Wolverines taken from alternate realities were sent back to their native realities, including Wolverine of Earth-811, to meet his destined death at the hands of the Sentinel.[citation needed]

Wolverine's remains, now back on Earth-811, were collected by X-51 from Earth-9997, looking for a group of "Heralds" to warn alternate Earths of the possibility of a Celestial embryo growing at the core of their Earths. X-51 selected Wolverine of Earth-881 as his first Herald. Wolverine was revived using a device that Merlin once used to revive Captain Britain at one point where the Captain was killed by a creature known as the Fury. Wolverine's body was able to be reconstructed due to the fact that the Adamantium encasing his skull protected his brain and it was from this organic material X-51 was able to resurrect Logan.[citation needed]

Logan was then teamed up with Spider-Girl from Earth-982, Iron Man 2020 of Earth-8410, Deathlok (Luther Manning) of Earth-7484, Killraven of Earth-691, Bloodstorm of Earth-1298, and Hyperion of Earth-1121. Each member of this group was asked to go to alternate worlds and warn their respective leaders of the danger of the Celestial embryos growing in Earth's core. Once successful, each member would be granted the one thing they always desired.[citation needed]

Logan's wish was to finally learn of his past. He was teamed up with Spider-Girl and they visited an Earth where Reed Richards was president (this Reed Richards was originally the Reed Richards of the Counter-Earth created by the High Evolutionary on Earth-616, who came to this reality via the Negative Zone portal) After getting into a battle with this realities Richards (also known as the Brute as he could transform into a purple Hulk like creature) Logan and Spider-Girl were rescued by this realities Susan Richards and Namor. Upon passing their information to them, Namor informed them that they had already vanquished the Celestial embryo growing in the core of their Earth.[citation needed]

Logan and Spider-Girl returned to the Watcher's Citadel on the Moon in Earth-9997 to find that the other members of their team faired just as well on their individual quests. They soon found that Watchers from different Earth's had come to judge Uatu the blind Watcher for Earth-9997 and kill him. The Heralds defended Uatu, during the course of this battle X-51 used the Citadel's transportation system to transport each Watcher onto each alternate Earth. Making them all guilty of the same crime that they accused Uatu of Earth-9997 of: revealing themselves to the population of Earth and thereby instigating enough curiosity to jeopardize the Celestial growing at each planets core.[citation needed]

Once the Watchers were defeated, X-51 has brought his Heralds to his Earth to seek out their wishes, already on Earth, Logan could sense that his fellow X-Men were alive on this reality. Logan then accompanied the Heralds to find Peter Parker where Spider-Girl got her wish of meeting her father (and also a "sister" in her Earth-9997 counterpart known as Venom), Logan also attended the wedding of Earth-9997's Captain Britain and Medusa and mets for the first time his Earth-9997 counterpart, who was fat and starting to lose his hair.[citation needed]

Later Logan was called to Canada where Sasquatch had found a number of creatures that resembled Logan himself in physiology.[citation needed]

Sasquatch theorized that they were Logan's "tribe" or at least relatives of some kind. X-51 then arrived and told Logan of his past. From X-51's records, his ancestors were known as the Moon Tribe who worshipped the Moon as a god. When the Celestial host came to Earth to manipulate early man's DNA, they had blocked out the sun and the Moon People considered the Celestials enemies and went into hiding. The Moon Tribe was one of many tribes that did not get altered by the Celestials (another being the Bear Tribe, which Sabertooth reportedly originated from.)[citation needed]

The people of the Moon Tribe were bred to adapt to their environment and over the years developed a healing factor and a set of bone claws that extracted from the knuckles as defense. However, as they were a throw-back of the mutated humanity their numbers seen began to thin out. In Logan's case, he was found by the Howlett family. At the time Elizabeth Howlett had given birth to a stillborn child and to avoid controversy used this found child as his replacement and raised it as their own. They kept the child bed ridden and insisted that he was ill and frail to further hide the fact that the boy was different. X-51 finished his explanation by stating that Wolverine was an example of what humanity would be today if the Celestials had not tampered with them millennia ago: beings free from disease and illness. With this information, Wolverine tracked down his Earth-9997 counterpart and explained his findings to him, this filled the Logan of Earth-9997 with relief that he cast off his human clothing and returned to nature.[citation needed]

Logan then aided in toning down a battle taking place in the Baxter Building between the Guardians of the Galaxy, Annihilus and Blaastar.[citation needed]

Further records of Wolverine's time on Earth-9997 remain unrecorded, and it is not certain if he ever returned to his home reality.

Seemingly those of Wolverine of Earth-616. However, his powers being that of mutation or actually human abilities has been thrown into question by the findings made by X-51 of Earth-9997.

Seemingly those of Wolverine of Earth-616.

When on Earth-811, Wolverine had access to the resources of the Canadian resistance.

Like many of his counterparts, the Wolverine of Earth-811 has an Adamantium laced skeleton. This lacing also includes his claws.

While in the employ of the Time Brokers, Wolverine was transported by their technological means, while residing on Earth-9997, Wolverine had access to the transportation devices of the Watcher stationed on Earth's Moon which could transport him to any location on Earth.

Like this? Let us know!
Retrieved from "https://marvel.fandom.com/wiki/James_Howlett_(Earth-811)?oldid=6118793"
Community content is available under CC-BY-SA unless otherwise noted.