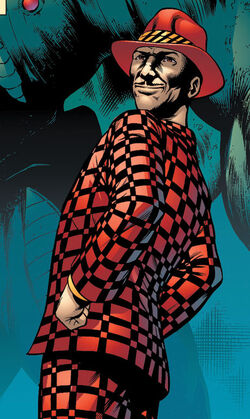 They are clandestine, they are frighteningly powerful, and they are not our friends. They have walked among us for more than forty years, robbing us of independence and endangering our lives...and they call themselves superheroes! America is overrun with them, they have established footholds in Canada, Africa and the Middle East. Even Russia has not proven immune. Many of the creatures are individually as powerful as entire armies! And they number in hundreds...hundreds! We have encouraged them! Last month, President Ronald Reagan granted a full pardon to the mindless engine of destruction known as the Hulk. These monsters ignore our laws and threaten our freedom, yet we welcome them with open arms! They must be contained! But how? How do you contain a being that can uproot mountains or walk through walls? How do you reprimand creatures that are indestructible, that can bend the very lightning to their will? How do we suppress the supermen? But let them know this...Impregnable though they may be, humanity is aware of the menace they pose. We have closed our ranks against them and we stand determined...waiting to see who will make the next move!

Sir James Jaspers ("Mad Jim Jaspers") was a British politician who served as Prime Minister of the United Kingdom and Leader of the Conservative Party. Jaspers served as a Member of Parliament for Haslope West.[2] Ideologically, he was known for his Anti-Superhuman stance on the safety of Britain. He won a landslide general election victory. It was later revealed he was a mutant with vast reality warping powers.[3]

James was born and raised in Finchley, a large district of north London. Not much is known about his childhood or education but he later joined the Conservative Party representing Haslope West. At some point he gained a knighthood from Queen Elizabeth II.[1] He grew wary about the growing superhuman threat in the UK and the rest of the world. His calls in parliament to deal with the threat almost had him thrown out.[2]

Prime Minister of the United Kingdom

For Mad Jim Jaspers of Earth-238 please see this page.

Captain Britain returned from Earth-238 to find this world repeating the events. Jaspers gave a speech denouncing the superhumans of the world. It was revealed his campaign was being funded by Sebastian Shaw who introduced him to Henry Peter Gyrich. it was also during the party he first noticed that he turned his white wine into red. Merlyn and Roma witnessed this and saw the threat coming to the country. After the party he contacted Vixen and told her to prepare S.T.R.I.K.E. to wipe out the superhumans of the nation at the end of the week.[3]

He won a landslide general election victory. Now PM he created his own police state sending out his S.T.R.I.K.E. team known as Beetles to round up all superhumans and mutants. His poster littered the city with the slogan: "In your hearts, you know he's right!"[4]

A time travelling Iron Man arrived in the UK during Jaspers reign as PM, he witnessed the Beetles' arbitrary arrests on mutants in London and met Captain Britain, who asked for help against Jaspers but he refused not wanting to disrupt the timeline.[5]

Vixen now worried that he had gone to far broke into Number 10 but found the laws of physics broken by his powers. On a whim he turned her into an actual "fox".[6] Jaspers now mad with power let his reality warp spread across the nation mutating the population into Warpies. Captain Britain rushed to stop him but when he entered the office he had become one with the universe.He held the hero aloft while looking over while viewing the chaos below. He tortured Captain Britain with false memories until he grew bored. When he recovered he tried to attack him but easily changed forms, he then trapped the hero in a combine harvester and left him for dead.[7] He then used his powers to create the Crazy Gang wacky group of superhuman beings. The Fury arrived on Earth-616 and attacked Jaspers after recognising that this Jaspers was not the same man it was forbidden to kill. He tried to vaporize him but Jaspers just rebuilt his body from scratch. The two battled taking on multiple forms but ultimately lead to a stalemate.[8]

After a reality-warping battle, The Fury managed to kill him by teleporting the pair outside of the universe, where Jaspers had no reality to control and was thus powerless. The Fury then, in its weakened condition, was destroyed itself by the one hero that had escaped from Earth-238, Captain UK.[9] Although Saturnyne took a sample of Jaspers' DNA with the intention of cloning him, the DNA was secretly destroyed by Merlyn's daughter, Roma.[10]

Sir James Jaspers later appears as an anti-mutant prosecutor during the trial of Magneto. However it's not stated whether this is the revived mutant Jaspers, a clone, or some lasting effect of the reality warp.[11]

Some years later, a large-scale reality warp originating on Earth-616 resulted in the recreation of the exterminated Earth-616 Jaspers and The Fury as a single combined being. Jaspers attacked Roma's Starlight Citadel, battling the Captain Britain Corps and transforming many of them into Fury facsimiles, before being confronted by Excalibur and the Exiles. All the while, the Fury taint within Jaspers grew until it tried to remake itself using his mind and body for materials. While Mad Jim and the Fury fought one another, his opponents, helped by the newly recruited former enemy Albion, took advantage of their distracted and weakened state to destroy them.[12]

Fury Vs the Corps

Jaspers, still infected by Fury, came to Merlyn and offered a team up against Captain Britain and Roma. However the Captain Britain Corps attacked him, but Jaspers just turned them into Furies.[13] They easily fought off the Corps and turned many into Furies except for Captain UK who escaped. Saturnyne shot him with a specialized weapon that would split his mind but she failed. He was confused by the incident, but before he could reconcile his mind, the Exiles attacked.[14] Jaspers overpowered the Exiles, but they were saved by Albion. During the battle, he transformed into the Fury, but he lost control completely.[15] The Fury was eventually blown up by Blink, seemingly destroying Jaspers.[16]

Jaspers was seen alive again for unknown reasons, overseeing Otherworld's Crooked Market, and was seen as a member of guest of Omniversal Majestrix Saturnyne in the Starlight Citadel.[17]

Sir James Jaspers is, without a doubt, one of the most powerful beings in the Marvel Universe, having powers beyond The Cosmic Entities. The less powerful Earth-238 version of Jaspers was able to warp his entire universe beyond recognition to such a degree that it became necessary to destroy the Earth-238 timeline completely just to stop the Jaspers' Warp from spreading to other universes. From what Merlyn hinted during his telepathic alert to Captain Britain, the more powerful Earth-616 Jaspers power would continue to grow and develop: "This version of Jaspers. Is too powerful, too dangerous. His counterpart could at least be halted, even if it meant destroying his entire continuum. This one is not so easily containable. And if he cannot be defeated, then the omniverse shall fall into chaos, and a new and hostile god shall play dice with matter."[citation needed]

Reality Manipulation: Mad Jim Jaspers has vast reality warping powers. He can restructure matter and energy on an enormous scale and bend and distort space to create tesseract spaces which are far larger than what would otherwise fit into a three dimensional space. He can warp and disrupt the laws of physics to make entire universes unsuitable for life if left unchecked. A feature that Jaspers has been shown himself to be capable of is to readily alter his own form and stature. At one time Jaspers had altered his own stature to become a giant and was holding Captain Britain between two of his fingers as if he were an ant. During his battle with the Fury, he altered his own form to change into completely different lifeforms and even non-living objects while maintaining his own human mind. He reanimated his entire body after having been fried into an empty skeleton by the Fury. He has been able to easily resurrect dead characters and create his own sentient lifeforms.[citation needed] It might also be possible that he used his reality warping powers to (briefly) become Prime Minister of Britain on Earth-616.

Jim is an experienced and persuasive leader.

Jaspers ability to manipulate reality is confined to existing matter and energy. When taken outside the universe where there is neither matter nor energy to control, he is rendered powerless.[18]

Like this? Let us know!
Retrieved from "https://marvel.fandom.com/wiki/James_Jaspers_(Earth-616)?oldid=6540933"
Community content is available under CC-BY-SA unless otherwise noted.