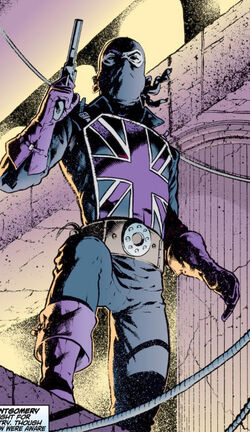 You know, chaps -- I think we've made history here tonight -- and the reverberations will be felt all the way to the heart of Berlin!

Lord Montgomery Falsworth was a British nobleman who became a secret costumed operative for the British government during World War I. Clad in a costume resembling the British flag, the Union Jack personified the fighting spirit of Great Britain even as Captain America would symbolize America's ideals and fighting spirit during World War II. As the British government intended, the mysterious masked figure of Union Jack also struck terror into the minds of the Germans, who came to dread his one-man commando-style actions against them. In the later days of World War I, Union Jack often operated as a member of a team of costumed operatives from America, Britain and France, known as Freedom's Five, who battled the Germans.[2]

Towards the very end of the war, Union Jack had grown disillusioned with war due to the bloodshed he had witnessed. In one of his final wartime missions, Union Jack was assigned by British Prime Minister David Lloyd George to investigate a series of murders of prominent British subjects, many of them important military leaders. Union Jack finally found the culprit, the vampire Baron Blood, who served the German cause. Unknown to Union Jack, the masked Baron Blood was actually his own younger brother, John Falsworth. Union Jack fought the vampire and stabbed him with a silver blade, forcing him to flee and thereby thwarting Baron Blood's attempt to murder a leading member of Parliament.

A few weeks later, World War I ended and Union Jack was officially retired from active service by the British Government. Montgomery Falsworth eventually married, had two children, Brian and Jacqueline, and came to lead the life of a peaceful country squire.

In 1938, Lord Falsworth was outraged at British Prime Minister Neville Chamberlin's policy of appeasement towards Adolf Hitler's German regime. Falsworth's son Brian, however, was an isolationist and pacifist and disagreed with Lord Falsworth's views. The arguments between the two grew more heated as time passed, until finally Brian left home because of them. Shortly afterwards, the Germans released photographs showing Brian Falsworth and his best friend Roger Aubrey with Hitler himself; both Brian and Aubrey publicly supported appeasement of Hitler's regime while they were in Germany. Lord Falsworth was appalled and saddened by this development. War between Britain and Germany broke out, and his wife, Lady Falsworth, died in the Blitz of 1941,[3] when a German bomb fell on a London hospital where she was doing volunteer work.

Early in World War II, Brian Falsworth and Roger Aubrey tried to leave Germany. The Nazi government was unwilling to risk the possibility that Falsworth and Aubrey would reverse their anti-war positions, and a Gestapo chief in Hamburg, Germany, tore up their passports. Falsworth lost his temper and attacked the Gestapo chief, only to be imprisoned. Aubrey then became violent and was likewise made a prisoner, but he was finally turned over to the Institute of Nazi Science, where he was brainwashed and subjected to experiments that transformed him into Dyna-Mite, a man less than a foot tall.

Brian Falsworth was imprisoned in Hamburg in the same cell as the German biochemist Eric Schmitt, who had concocted a variant of the Super-Soldier formula that was used to turn Steve Rogers into Captain America. Dying, Schmitt asked Falsworth to keep the sample of the formula he had concealed on his person from falling into Nazi hands. Falsworth took the disguised flask, drank its contents, and was immediately physically enhanced by the formula. Falsworth escaped the prison and became a costumed fighter of Nazis within Germany itself known as the Destroyer.

In England in 1942, Lord Falsworth and his daughter Jacqueline befriended the Invaders, a team of costumed champions serving the Allied cause much as Freedom's Five had done during World War I.[2] Lord Falsworth again donned the costume of Union Jack in order to help the Invaders battle the returned Baron Blood, and was made an Invader himself.[3] However, in a battle between Union Jack and Baron Blood in a cave beneath the Falsworth estate, the vampire hurled a massive boulder at Union Jack, crushing his legs and leaving him permanently crippled. Union Jack managed to pry the boulder off his legs, causing the huge rock to strike Baron Blood, knocking him backwards. The vampire fell onto a sharp stalagmite, which impaled his body, killing him.[4]

Lord Falsworth's career as Union Jack was over, but as a result of being bitten by Baron Blood and then receiving a blood transfusion from the original Human Torch, Falsworth's daughter Jacqueline became the superhumanly powerful Spitfire and joined the Invaders herself.[5]

Lord Falsworth, Spitfire, and Dyna-Mite parachuted into Nazi Germany in the hope of finding a means of restoring the brainwashed Dyna-Mite's memory. Lord Falsworth knew that Dyna-Mite was Roger Aubrey and hoped that once Aubrey's memory was restored, he could reveal what happened to Brian Falsworth. Lord Falsworth and Dyna-Mite were captured by the Germans but were rescued by the Destroyer, who revealed his true identity to his father and was reconciled with him. Lord Falsworth suggested that Brian adopt the costume and name of Union Jack, and Brian agreed.

Lord Falsworth hoped that Jacqueline's son, Kenneth Crichton, would become the third Union Jack, but Kenneth did not wish to do so.

Lord Falsworth died quietly while watching the burning of Baron Blood's remains, knowing that his brother's evil had been overcome at last. Joseph Chapman has continued to operate as the third Union Jack, carrying on the noble tradition of both Montgomery and Brian Falsworth.

Union Jack was a superb athlete and excellent hand-to-hand combatant.

Union Jack possessed the normal human strength of a man his age, height, and build who engaged in intensive regular exercise.

Like this? Let us know!
Retrieved from "https://marvel.fandom.com/wiki/James_Montgomery_Falsworth_(Earth-616)?oldid=6442981"
Community content is available under CC-BY-SA unless otherwise noted.