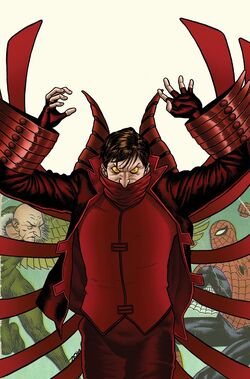 Jimmy Natale was a fixer for the mob whose job was to clean up the messes that others made. Over time, the workload became to much for him to handle, and he went to his superiors requesting help. He suggested picking a candidate to mutate into a human-vulture hybrid using the same technology that created the Scorpion and the Fly. However, under the impression that the operation would cause memory loss, he was chosen to be the candidate and was forcibly turned into a new vulture. He went rogue soon afterward and began eating weak and wounded goons.[2]

He first encountered Spider-Man when he stumbled upon Vulture devouring one of his victims on a rooftop.[3] His abilities, such as acid vomit, took Spider-Man by surprise, and he was forced to retreat while temporarily blind.[3] Spider-Man lured him out later on and fought him, a battle that took them to Yankee Stadium. After capturing him, he broke his arms and left him for the police.[4]

Electro, under the orders of Sasha Kravinoff, freed him from Ryker's and let him run wild. He began to remember things and came after crime bosses involved in his creation. This scared the mob to release information falsely accusing Mayor J. Jonah Jameson of being involved. This news made its way to the Vulture after interrogating a captured crime boss. Seeking revenge, Vulture came for him and killed one of his security staff while Jameson fled.[5] Spider-Man tried to defeat Vulture, but he was able to escape. He then targeted another crime boss involved in his creation and forced the truth out of him.[2]

He was hired by the Exchange to kill the Punisher, but the resulting fight ended with him being stabbed repeatedly until he died.[6]

Lack of Superhuman Durability: Unlike most characters with superhuman strength, Vulture does not appear to possess significantly enhanced durability, as Spider-Man was able to break both his arms with a bear hug.

This Vulture wears a red version of the classic Vulture suit. It enables:

His red version of the classic Vulture suit possesses razor-sharp wings to attack.

His red version of the classic Vulture suit enables him to fly.

Like this? Let us know!
Retrieved from "https://marvel.fandom.com/wiki/James_Natale_(Earth-616)?oldid=5776020"
Community content is available under CC-BY-SA unless otherwise noted.