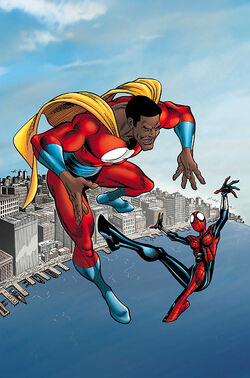 Rhodes gained superhuman powers after exposing himself to experimental microscopic robots. While Tony Stark had intended to test them on himself, Rhodes did not feel it would be right for Stark to unnecessarily risk his life. Although now-blessed with exponentially-increasing invulnerability and an impressive array of energy-based attacks, the nanites slowly corrupt Rhodes' mind, eventually destroying his personality and leaving him as little more than a very powerful, humanoid robot.

Rhodey eventually worked as a personal bodyguard for Tony Stark, and although he adopted a superhero uniform neither he nor Stark bother to come up with a moniker for him. Spider-Girl referred to him as "Fred," for simple lack of anything else to call him.[citation needed]

Rhodes possesses a super-durable body, and is capable of flight, and concussive blasts.

Like this? Let us know!
Retrieved from "https://marvel.fandom.com/wiki/James_Rhodes_(Earth-982)?oldid=5420859"
Community content is available under CC-BY-SA unless otherwise noted.