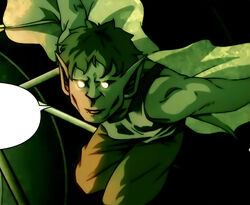 Young Jimmy Santini was with his father in an investigation of illegal toxic waste dumping in Carlsbad Caverns National Park where his father was either shot in the back by the polluters or fell to his death in the deep caverns (the full details were murky in Jimmy's diary). Jimmy was lost in the caverns and drank water that "tasted like metal." He was eventually rescued and returned to his mother. Soon the chemicals began to take effect, and Jimmy sprouted wings. His mother proclaimed him a demon, causing Jimmy to run away. He continued to mutate and ended up stealing food to survive. He arrived in New York City and made his home under an old pier. Jimmy began stealing food from people dining on rooftops scaring people in the process. Thus, the people began to dub him "Batwing."

When New York City Councilman Randolph Cherryh was dining with his girlfriend, Batwing appeared and stole some of his apples, humiliating him. Randolph then placed a bounty on him which Peter Parker (alias Spider-Man) decided to take part in during financial problems. Randolph arranged for a party as part of a trap. When Batwing came, the police sprang and began shooting only for Spider-Man to web up the guns and pursue Batwing. Batwing battled with Spider-Man before fleeing back to where he lived under the pier.

When Spider-Man followed Batwing to the pier, he discovered that Batwing was just a scared kid who was stealing food to survive. Spider-Man read some of his history before Jimmy ran off right into the Councilman who secretly followed in his helicopter. Randolph did not care if Batwing was just a kid, and he was about to kill the boy when Spider-Man webbed down his men. Batwing fled despite Spider-Man's offer to get Reed Richards or Henry Pym to help cure him. Randolph vowed to ruin Spider-Man's life before having his mouth webbed and being shoved into a garbage can.[2]

Spider-Man later asked Dr. Curt Connors to use his expertise to help cure Jimmy. When an accident caused Curt to become the Lizard again, Batwing helped Spider-Man track him down and cure Curt. Curt and Jimmy left New York for someplace quiet where Jimmy could be cured.[4] When Curt's cure failed, Batwing returned to New York and battled Spider-Man again. With his father dead and his mother rejecting him, Jimmy just wanted to die. Spider-Man tracked down Jimmy's mother and told her that Jimmy was still her son, regardless of his condition, and that she was wrong to reject him. Just as Batwing was about to be shot by the NYPD, Jimmy's mother intervened and told her son that she still loved him. Upon hearing this and knowing that he is loved, Jimmy reverted to his human form, and the police backed off. Jimmy went home with his mother, finally receiving the love that he had needed so badly.[5]

After the superhero Civil War, Batwing entered the 50-state Initiative as one of the recruits at Camp Hammond along with Gorilla Girl, Prodigy, Butterball and others. During the Skrull invasion, Batwing was among the Initiative cadets that were seen fighting the Skrulls.[1]

When Delroy Garrett Jr. left the Initiative after the death of Crusader, Batwing was one of the many Initiative cadets who wasn't pleased with Delroy killing him.[6] Batwing was then assigned to the Shadow Initiative.[7] He was later seen as part of the Avengers Academy after their expansion.[8]

As of Avengers: The Initiative #13 he was still considered underage as far as the consumption of alcohol in the state of Connecticut, which is 21, was concerned.

Like this? Let us know!
Retrieved from "https://marvel.fandom.com/wiki/James_Santini_(Earth-616)?oldid=6470966"
Community content is available under CC-BY-SA unless otherwise noted.