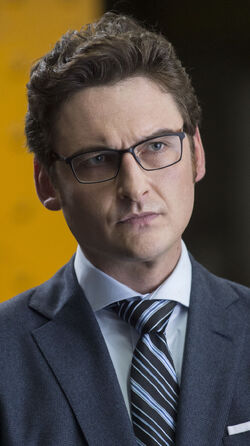 After discovering Karen Page, an ex-employee of Union Allied Construction, had been digging in his boss's past and had found Fisk's mother Marlene Vistain, Wesley kidnapped her. At a warehouse, he confronted Karen, and demanded that she end her investigation, threatening her with a gun he left lying in the table. When Wesley was distracted by his phone ringing, Karen snatched the gun and aimed it at him. Karen called Wesley's bluff that the gun wasn't loaded, and shot him several times before she fled the warehouse.[2]

Multilingual: Wesley can speak English and, at least, understand Chinese.[1] and Japanese.[3]

Negotiation: Wesley is an expert communicator and is adept at facilitating trade negotiations between his employer and several major crime syndicates. His command of languages makes him an invaluable asset for dealing with foreign elements among New York City's criminal underworld.[1]

Like this? Let us know!
Retrieved from "https://marvel.fandom.com/wiki/James_Wesley_(Earth-199999)?oldid=6074307"
Community content is available under CC-BY-SA unless otherwise noted.