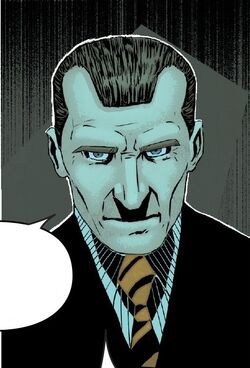 James Wesley was a lawyer who always hung around Kingpin for any last minute orders, typically given in private. This made him the second most feared man in Kingpin's organization considering those orders could include when someone was to be killed,[2] though it also included mundane tasks such as when he was directed to help locate Nuke.[3]

Wesley later gave Mr. Switzer his check to leave the conglomerate,[4] then seeing the devastation caused by Nuke in Hell's Kitchen, Wesley feared he could be connected to Kingpin's organization.[5]

Like this? Let us know!
Retrieved from "https://marvel.fandom.com/wiki/James_Wesley_(Earth-616)?oldid=5533225"
Community content is available under CC-BY-SA unless otherwise noted.