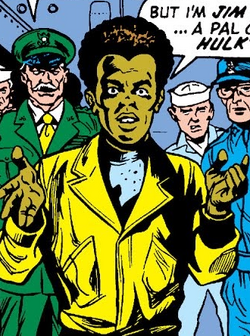 Jim Wilson grew up in Harlem at odds with his father, a strict Christian minister. A restless dreamer, Jim had always wanted to travel, an impulse perhaps fueled in part by the demise of the Wilsons' upstairs neighbor "Smiley". An elderly blues musician, Smiley had died a lingering, lonely death when Jim was still very young, and the shaken Wilson boy prayed he would never die old and helpless like that. Seeking adventure and escape from his fractious household, Jim dropped out of school at age 15, sparking an angry argument with his father that nearly ended in violence. Jim left town on the next bus to Los Angeles, where he soon became a starving street person. Unwilling to return home, Wilson lived in a burned-out tenement building and claimed he was an LA native whose parents had died in a fire, sometimes even convincing himself that his story was true. The desperate Jim once snatched a woman's purse, but felt so ashamed that he left it behind without taking any money.

When the fugitive man-monster Hulk (Bruce Banner) sought refuge in Jim's tenement, he and Wilson bonded with each other as kindred spirits and fellow outcasts. Jim quickly became one of the Hulk's closest friends, aiding him against foes such as Hydra, the Leader, Xemnu, Rhino, Abomination, Quintronic Man and Stingray. Jim also began a recurring association with the US Army, who often called on Wilson's and since he was one of the few people with any positive influence over the unstable Hulk's actions. Despite his wariness of authority in general and the military in particular, Jim gradually became friendly with General "Thunderbolt" Ross and his daughter Betty. Wilson also began a serious long-term romance with fellow Talia Green, though she disapproved of Jim's ties to the Hulk.

Briefly drawn into the subversive Corporation organization, Jim quickly turned on them and was marked for death, but Hulk rescued him from their assassin Constrictor. Befriending stage magician Kropotkin the Great and Banner's landlady April Sommers, Jim also participated in Doc Samson's ill-fated attempts to rehabilitate the Hulk, sabotaged by Corporation agent Moonstone (Karla Sofen). The Hulk subsequently helped Captain America, the Falcon and Marvel Man (Wendell Vaughn) deal the Corporation a crushing defeat. In the process, Jim learned the Falcon was his uncle Sam Wilson, and he renewed ties with some of his Harlem relatives. Jim also joined community-policing group the Young Watchers, helping Falcon and Spider-Man purge a secret criminal faction within the Watchers led by gang boss Stone-Face.

Somehow contracting HIV, Jim was abandoned by Talia and found a new calling as a manager of a Los Angeles clinic that cared for dying AIDS patients. When the clinic ran afoul of crime boss Paul Lang, Jim called in Falcon, fellow Hulk sidekick Rick Jones and the now-intelligent Hulk for assistance and Jim helped fight off Lang's super-assassin Speedfreek. Seriously wounded, Jim recovered despite his HIV status.[1].

Jim later attended the bachelor party thrown for Rick Jones before he married his longtime girlfriend Marlo Chandler.[2] Jim, however, had been lying for months about how seriously his AIDS had ravage his system. While attending a protest to keep a child (who was also HIV positive) in public school, he suffered further injuries when he was attacked by parents who wanted the child out. The Hulk broke up the scuffle and arranged medical treatment for Jim, whose health was far worse than he had previously admitted. Dying, Jim begged for a transfusion of Banner's gamma-irradiated blood in the hopes that it might cure him, but the Hulk refused, fearing he might transform Jim into another destructive monster. Accepting Bruce's decision, Jim died peacefully shortly thereafter with the Hulk at his beside.[3] Banner later anonymously donated enough money to keep Jim's clinic running for the next decade.

Quick-witted and resourceful, Jim developed some fighting skills while partnered with the Hulk; achieved a passing familiarity with assorted military equipment, installations and procedures during his association with the US Army; learned chess from Betty Ross; and trained in unarmed combat with the Young Watchers. An experienced traveler and a frequent hitchhiker, he had extensive knowledge of many American towns and highways. Charismatic and funny, Jim was a loyal and courageous young man who made friends easily. He was also a capable manager and a dedicated social activist.

Like this? Let us know!
Retrieved from "https://marvel.fandom.com/wiki/James_Wilson_(Earth-616)?oldid=5685982"
Community content is available under CC-BY-SA unless otherwise noted.