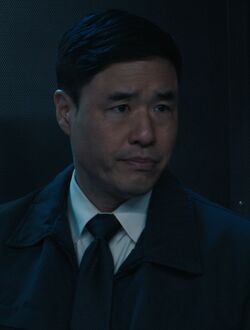 Agent Jimmy Woo was a high-ranking FBI agent. Growing up in Bakersfield, Woo idolized the law enforcement agency, as he had a poster of famous Prohibition agent Eliot Ness on his wall.[1]

While stationed in San Francisco, among his various tasks was to make sure Scott Lang did not violate his parole and remained under house arrest for his actions with Captain America in Germany. Although Scott complied with the terms of his parole so he could stay close to his daughter Cassie, Woo and the agents under him would routinely search his house to make sure he was not hiding anything from them.

Agent Woo was also interested in apprehending Dr. Hank Pym and his daughter Hope Van Dyne. Pym violated the Sokovia Accords by creating the Ant-Man Suit Scott Lang used in Germany, and had been on the run from the law with Hope. Woo was particularly suspicious that they attempted to contact Scott - another violation of his parole. Lang, however, had no contact with either of them until a few days before the end of his house arrest when he received a vision from Pym's long-lost wife Janet van Dyne. Hank and Hope kidnapped Scott and replaced him with an Ant that was programmed to replicate Scott's daily routine to fool Agent Woo.

Scott worked with Hope and Hank until Sonny Burch, an enemy of Hank and Hope, informed a corrupt FBI agent of their whereabouts, and that Scott Lang was with them violating his house arrest. Woo would have caught Scott if Cassie, her mother Maggie, and her step-father Jim Paxton had not coincidentally been at his house to distract him long enough for Scott to get back in time.

Shortly after Woo's team finished their sweep of the house, Scott's guilt for abandoning Hank and Hope got the better of him, and he again violated his house arrest to break them out of FBI custody. Woo sent another team to search Scott's house when footage of a "Giant-Man" in the Ant-Man suit in San Francisco Bay appeared on the news. Once his business with Hank, Hope, and Janet was finished, Scott hurried home so he again would not be caught violating his house arrest. Scott distracted Woo by leaving an empty, giant-size Ant-Man suit against a building, giving Scott just enough time to avoid getting caught.

Without proof that Scott left the house, Agent Woo had his ankle monitor removed as his house arrest came to an end. Woo promised Scott he would see him soon, leaving Scott confused that Woo wanted to hang out with him.[2]

Five years later, Woo was investigating a missing person within the witness protection program. Woo became suspicious when he discovered that associates of the missing person didn't know of the person. Arriving at the last known address of the missing person in Westview, New Jersey, Woo was equally perplexed when the local officers claimed that the town of Westview didn't exist either. Agent Monica Rambeau of S.W.O.R.D. arrived on the scene and Woo filled her in. She approached the town, then appeared to get sucked into something, before vanishing in front of Agent Woo.

SWORD set up an operating base around Westview not long after and SWORD Director Tyler Hayward even got involved. Dr. Darcy Lewis, a physicist SWORD brought in, soon discovered a broadcast signal from within the town that was broadcasting a 1950s sitcom that appeared to star Avengers Wanda Maximoff and the Vision. Agent Woo and Dr. Lewis attempted to make contact with Wanda, but just discovered that Wanda would just them edit them out of the broadcast. Soon after, Monica came flying out of the strange barrier.[1]

With the intel of life inside Westview from Monica, SWORD had a briefing the next morning that identified Wanda as the town's hostage taker. Woo argued with Director Hayward over painting Wanda as a bad guy, but ultimately stepped aside. Hayward ordered a drone strike on Wanda, which prompted Wanda to exit Westview and warn the agents not to try anything else.[3] Furious at Hayward, Monica argued that they should focus their attention on helping Wanda, which Hayward responded to by kicking her, Woo, and Darcy off the base. However, the trio persisted by hacking into Hayward's secure files and discovering Project Cataract:[4] SWORD's plan to salvage Vision's body for their own purposes. The next day, Agent Woo accompanied Agent Rambeau as she attempted to re-enter what Darcy dubbed "the Hex". Although unsuccessful at re-entering the Hex using a vehicle, Agent Rambeau re-entered by forcing her way through, despite Woo's plea not to.[5]

S.W.O.R.D eventually apprehended Agent Woo, which led Hayward to boast about his victory at hand. Woo stole a nearby cellphone, while Hayward was pre-occupied, then used it to call the F.B.I.. Woo's backup arrived within the hour, when Wanda's kids and Darcy already had incapacitated Hayward and the other S.W.O.R.D. agents, which made it easy for Woo and F.B.I. to arrest them. Woo then led the following clean-up and investigation.[6]

Like this? Let us know!
Retrieved from "https://marvel.fandom.com/wiki/James_Woo_(Earth-199999)?oldid=6195227"
Community content is available under CC-BY-SA unless otherwise noted.