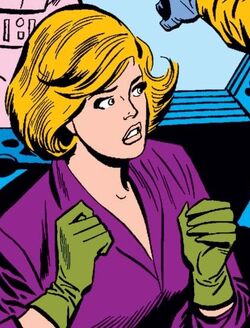 Janice Cord was the daughter of Drexel Cord, a business rival to Tony Stark. She went to the Stark Industries to warn Jasper Sitwell about her father's plan to destroy Iron Man with his creation, the Demolisher, which eventually killed Drexel Cord.[1]

After her father's death, she began dating Tony Stark, who encouraged her to continue with Cord Industries instead of selling her assets. To do so, she hired Alex Nevsky, an engineer who used her resources to build the third Crimson Dynamo armor while at the same time he courted her. Janice died when she got in the way of a fight between Iron Man (Stark), Titanium Man and the Crimson Dynamo (Nevsky). She died in Iron Man's arms, never knowing that Iron Man was her boyfriend Tony Stark.[2]

Like this? Let us know!
Retrieved from "https://marvel.fandom.com/wiki/Janice_Cord_(Earth-616)?oldid=5825302"
Community content is available under CC-BY-SA unless otherwise noted.