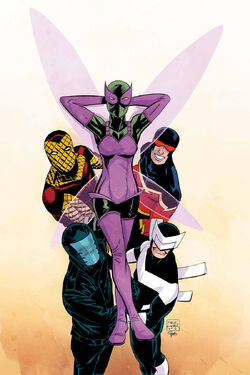 Janice Lincoln is the daughter of the super power mobster, Tombstone. Janice's mother was an ex-girlfriend of Tombstone during his early days in organized crime. Janice grew up a semi-normal life with Tombstone in and out of her life, usually showing up to help out with bills and schooling. However, Janice sought the thrill of her father's lifestyle.[3]

It was a few years later that Baron Zemo and the Fixer provided Janice with a suit of Beetle armor and a nano-virus as part of their plan to destroy the new Captain America (Bucky Barnes). She emerged from the rubble of an explosion she caused to confront Captain America (Bucky) and Black Widow.[4]

The all new Beetle fought Bucky and Black Widow in a short battle and was defeated. Bucky unmasked her, and realized she was responsible for using the nano-virus on him, when she posed as a bartender to slip it into a drink while in a bar with Steven Rogers and the Falcon. She was imprisoned in the Raft where she revealed that she knew Captain America and Bucky are one and the same. While Janice resisted Bucky and the Widow's attempts to interrogate her for the identity of her employer, the Fixer asked Zemo whether they should punish her for her failure. Zemo was merciful, saying that she knew no information that would hurt them. Janice was left to her own devices, and the heroes still managed to piece together Zemo's identity. However, Zemo still exposed Captain America's true identity to the general public.[5]

Through unknown means, she was apparently freed and became a member of Boomerang's Sinister Six fighting Superior Spider-Man.[1] After being imprisoned, Boomerang was secretly contracted by the Chameleon to recover the head of former Maggia leader Silvermane from the Owl. To this end, Boomerang deceived the team into agreeing to help him.[6]

However, after the original Beetle, the reformed Abe Jenkins, was assigned to be Boomerang's parole officer, the team voted him out and Janice as their new team leader. Speed Demon's vote was motivated by his unrequited attraction for her. The others noted that the Beetle became more despotic as team leader, but attributed this as a reaction to the pressure to succeed and avoid incarceration. Boomerang secretly notified Power Man and Iron Fist of the Sinister Six's whereabouts. Janice and her teammates were arrested, but Boomerang freed them in transit to jail, reclaiming his leadership role.[7]

After assaulting the Owl's base, the Beetle, Overdrive, and Speed Demon were captured by the villain and interrogated. The Beetle tried to blackmail the Owl into releasing them while covertly calling for backup. Unimpressed, the Owl prepared to execute her when reinforcements arrived in the form of Tombstone who was revealed to be her father to rest of the group.[8]

Janice appeared at Stark Industries, claiming to have reformed, and applying for the open Head of Security position alongside Prodigy, Victor Mancha, and Scott Lang. After seducing Iron Man, Janice tried to assassinate him at the behest of an unidentified client, but was disarmed by Lang, then pursued and presumably apprehended by Iron Man.[9]

Soon after surviving the hunting of various animal-themed supervillains in Central Park as part of an event orchestrated by Kraven the Hunter,[10] Janice formed a criminal enterprise called the Syndicate with the objective to support female villains in their careers and bridge the gap in male-female disparity of organized crime. She was joined by Scorpia, Lady Octopus, White Rabbit, Trapstr, and the female Electro.[11]

Typical human weaknesses, without the use of the Beetle armor

Like this? Let us know!
Retrieved from "https://marvel.fandom.com/wiki/Janice_Lincoln_(Earth-616)?oldid=5844080"
Community content is available under CC-BY-SA unless otherwise noted.