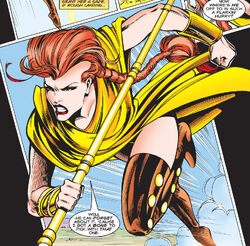 Born some 70 years in the future of Earth-9200's Dystopia, a city ruled by the tyrannical Maestro in a world devastated by nuclear conflict, Janis Jones was raised by her "Gramps", Rick Jones. He taught her to fight and about the long past age of heroes. After her parents were slain by the Gravity Police,[1] Janis joined the rebellion to overthrow Maestro. Using Dr. Doom's time machine, Janis was sent back in time to Earth-616 to recruit the Maestro's younger, not-yet-corrupt, self, the Hulk (Bruce Banner), who helped defeat the Maestro and his forces. Gramps died during the conflict, so Janis and the Hulk scattered his ashes.[2]

With the Maestro's old foe the Abomination having conquered the city with his army of mutates, Janis fled into the past pursued by the bounty hunter Quarry, arriving in present day Earth-616, where she again hoped to recruit the Hulk.[3]

Though she soon located him, and he eliminated Quarry, his current personality was less amenable, and he refused to return to the future with her, although he did let her accompany him for a while. She helped him battle the Pantheon, the Thunderbolts, and the Wildman before being caught up in a battle between the Hulk and another Hulk from another timeline (Earth-9722) where he had replaced the Maestro; this alternate Hulk soon faded back to his own timeline. Separated from the Hulk, Janis contacted the present-day Rick Jones.[4]

When Apocalypse turned the Hulk into his Horseman War, the New World Order had the Absorbing Man contact Rick and Janis, hoping Rick might be able to get through to the Hulk. Instead War badly injured Rick, though Janis used this to break Apocalypse's conditioning, Janis covertly monitored Rick's condition in the hospital, then slipped away. Her subsequent activities are unrevealed.[5]

A skilled acrobat and fighter, Janis can use her long ponytail as a weapon.

She carries a quarterstaff keyed to her molecular structure, which can fire powerful energy blasts.

Like this? Let us know!
Retrieved from "https://marvel.fandom.com/wiki/Janis_Jones_(Earth-9200)?oldid=6402646"
Community content is available under CC-BY-SA unless otherwise noted.