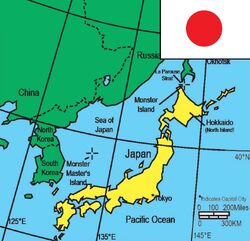 Japan (日本), officially the State of Japan is an island country in East Asia. Located in the Pacific Ocean, it lies to the east of the Sea of Japan, the East China Sea. It's capital and largest city is Tokyo.

Once World War II ended, the Japanese leader was killed by Xavier, and Japan was drowned by Atlantis with the rest of the world. As the half-Atlantean/half-Japanese mutant Namor witnessed the destruction of Tokyo, he led on Atlantis with the intention to confront the Atlantean High Command and as this nation was destroyed too, by Xavier, Namor vow his life to avenge his two people from the bald mutant for ten years.[3]

Some of the residents encountered by the Marvel heroes and villains in this reality come from this country. One of them, a martial artist called Akuma, had a brief run-in with the X-Men as they fought their way to Avalon in order to stop Magneto's plans.[5]

Like this? Let us know!
Retrieved from "https://marvel.fandom.com/wiki/Japan?oldid=4727704"
Community content is available under CC-BY-SA unless otherwise noted.